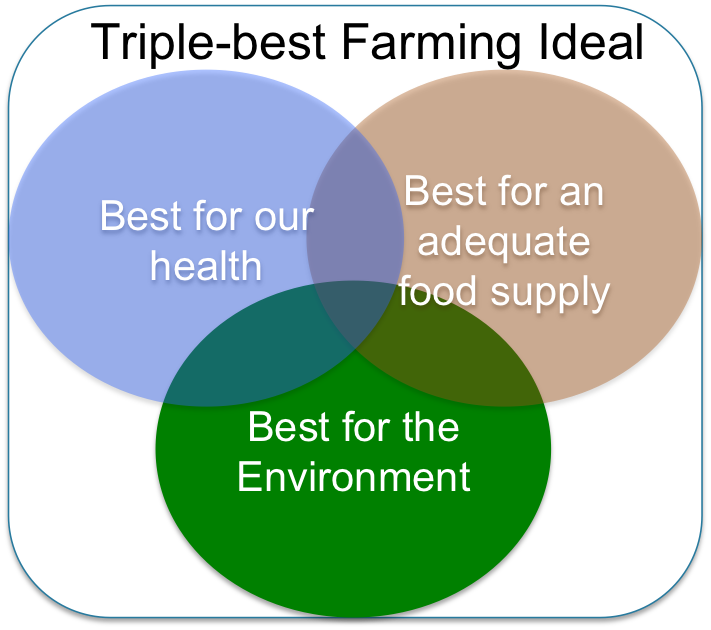 Almost any farmer or consumer could agree on the following ideals for our agricultural system:

"Farming in ways that are best for us, best for the environment, and best for providing an adequate food supply."

I believe that these are the goals and ideals of organic customers and organic farmers, and I share them. If organic could deliver on these “triple best” goals, I would be among its strongest supporters, but I don't believe that it can.  The organic rules are based on the assumption that “natural” is always best.  That assumption originated in a pre-scientific era, and it does not hold up to what we have learned over the last century.  The "natural" definition is great for marketing purposes, but often not the optimal criterion to guide farming practices.

The Original Contribution of the Organic Movement

The important contribution of organic early in the last century was its focus on improving soil health/quality.  The pioneers of the organic movement worked out certain farming methods using “natural fertilizers” to mitigate the nutrient-depleting and soil-degrading effects of the plow-intensive farming of the late 19th and early 20th century.  The organic focus on natural also meant that it eschewed some of the early pesticides, which were later found to be problematic for health and the environment.  For a period of time, organic may have been, in fact, the best farming option for us and for the environment.
Since then we have learned more and more about environmental systems, genetics, microbiology and human health.  Based on that, increasingly rigorous regulatory processes were put in place and farming practices have changed dramatically.  Sometimes organic growers were in the lead in making those changes.  But increasingly, the “natural” constraints of organic are making it difficult or even impossible for organic farmers to implement what we now know to be best for us, best for the environment, or best for the food supply.  I'd like to describe six specific examples of those limitations.

One of the greatest challenges of farming is providing a growing crop with the necessary mineral nutrients when it needs them. When nutrients are free in the soil and not being actively absorbed by the growing crop, they have the potential to move into ground water, or to wash off into surface water.  If they do, they can become health issues and/or foster algal blooms that cause “dead zones” in bodies of water.  Excess nitrogen in soils can lead to the generation of the potent greenhouse gas, nitrous oxide. There are specific conditions under which natural fertilizers like manures or compost can reduce these problems, but there are also conditions under which the uncontrolled, nutrient release pattern from natural fertilizers can be quite problematic. Depending on how and when they are delivered, “synthetic” fertilizers can be deployed in ways that do a better job of providing the crop’s need without as much risk of these forms of pollution. For example, drip irrigation systems are very efficient ways to deliver fertilizers but cannot be used for most forms of organic fertilizers. Triple-best farming requires the ability to use both natural and synthetic fertilizers in the right settings and with the right delivery methods. There is even the possibility of making synthetic nitrogen using renewable energy.

What makes a pesticide safe for us or for the environment is not related to whether it is “natural."  Some of the most toxic chemicals known are produced in nature. The reason that the American consumer can have confidence in the safety of crop pesticide use is that the EPA demands a great deal of data for its multi-dimensional risk assessment for any chemical, natural or not, that is going to be used for pest control.  These tests involve multiple dimensions of human toxicity as well as assessments of environmental fate and environmental impact. Some, but not all “natural products” meet those standards.  Some, but not all, synthetic products meet those standards.  The details of how synthetic or natural pesticides can be used are then dictated in “label requirements” specific to the properties of that chemical (e.g. how long before the crop is harvested, what worker protection standards are needed, what considerations are needed relative to sensitive environmental settings…).  It is this regulatory process, not naturalness, which ensures environmental safety and residue levels that are safe even by very conservative standards.  In many cases the "synthetic" options are the very best choice among the approved options.
(Note: the graph of California use data shown earlier has been removed.  Sulfur classified in that figure as Category II is actually Category IV for oral acute toxicity, Category III for dermal toxicity)

Organic farmers have been early adopters of many pest control options other than classical, chemical pesticides (genetic resistance, biological controls, crop rotations, natural pest enemies, and pheromone-confusion…), but at least since the 1970s, this has also been a growing component in “conventional agriculture” called Integrated Pest Management(IPM).  In many crop systems, modern synthetic pesticides are one important component in these mixed approaches.  For example, there is a problem in the current, California spinach crop, which has around 50% organic production.  There is a disease of that crop called downy mildew and it is transmitted from season to season via survival in the seed.  Through conventional breeding, it has been possible to develop spinach that is resistant to that fungus.  The conventional growers also use a relatively benign synthetic fungicide as a seed treatment against the disease - thus they are using an integrated program of genetics and a fungicide.  For the organic production, the seed treatment is not allowed.  Without the multiple control strategy, the fungus has rapidly mutated to get around the genetic resistance, and six good sources of resistance have been lost within a few years.  Each time, the newly virulent strains have emerged first in the organic fields. This gap in the IPM program is now putting the entire California spinach industry at risk.  There are similarly precarious situations in other crops.

It takes a lot of money to do the testing needed to commercially develop and insure the safety of any new agricultural pesticide - more than $200MM.  That level of spending is appropriate to meet our modern safety standards, but it means that the commercial development of any new synthetic pesticide can only be justified for a very large market within the agricultural realm.  For problems that only affect a small part of the food supply, it is not possible to justify the investment in a new option.  Fortunately, the EPA has a special, lower cost registration process for low toxicity chemicals that already occur within the food supply.

A good example of this is a new product for preventing sprouting in stored potatoes.  The compound 3-decen-2-one already occurs in at low levels in potatoes as well as in mushrooms, tuna fish, yogurt and soy.  An identical, synthetic version of the chemical can now be used with stored potatoes and it is a better, safer option than the old sprout inhibitor, CIPC.  Because of a purist interpretation of the organic rules, the new sprout inhibitor cannot be used for organic potatoes.  Instead they are treated repeatedly with clove oil – a more costly and less effective option with no other “triple best” advantages.

Starting in 1960, farmers have been working out farming systems that do not require physical tillage of the soil.  When these are combined with the use of cover crops and GPS guided equipment use, it is possible to raise the important row crops (wheat, barley, canola, soybeans, corn, cotton…) in no-till or minimum-tillage systems that improve soil health and quality.  It is also an important “best” system to prevent soil erosion, reduce water pollution risk, and sequester carbon to mitigate climate risk.

This system is much more like the way soils are built in natural prairie habitats and is not dependent on outside inputs of organic matter as is the case in the typical organic systems.  In order for these new options to be pursued efficiently on a large scale, herbicides are necessary as are controls for certain pests which are favored in a non-tillage system.  Organic growers don’t have many of the practical tools to manage these issues, and so they are ironically unable to fully or cost-effectively pursue these best, reduced tillage protocols.

Genetic modification of crop plants has always been an important means of making farming better able to meet our food supply goals.  In recent history it has become possible to make more precise genetic modifications using the tools of genetic engineering – tools which were in fact drawn from nature. For example,  restriction endonuclease enzymes occur naturally and cut DNA at specific target sites, and the Ti plasmid of Agrobacterium which inserts DNA into chromosomes of plants.  In the last few years, even more precise and efficient tools for genetic modification have been discovered within a group of ancient microbes we call the Archaea (e.g. the CRISPR-Cas9system).

As deployed within the unprecedented and rigorous regulatory framework for "GMO Crops", these tools have become an important means through which triple-best crop improvements can be made.  In her book “Tomorrow’s Table,” UC Davis molecular biologist Pamela Ronald has made an articulate argument for why these tools should be embraced for organic farming. But such suggestions are not even considered by the fierce defenders of the organic rules.  Even when genetic engineering is used to transfer something like a gene from wild potatoes into commercially relevant potatoes, the resulting triple-best crop will not be available to organic farmers (as in the case of the new, Innate 2 potato from Simplot)

A Missed Opportunity to Embrace Best Practices by Organic

There was a window of opportunity in 1990 when the organic rules could have been updated to use science-based criteria rather than the restrictive obligation of natural.  In that year, the US Congress tasked the USDA with formulating a national organic standard, and that research-oriented agency was inclined to bring modern knowledge into their rule-making process.  Such an approach was vigorously opposed by key elements of the existing organic advocacy community.  When the national standard emerged in final form in 2000,  at had only enshrined the "natural requirement" which continues to limit the ability of farmers to pursue many triple-best strategies such as those I’ve described above.

Unfortunately, some of those who market organic products, and some who advocate for organic, continue to make unsupportable claims that organic is best for us and for the environment.  Many consumers accept these claims and believe that they are doing the right thing by paying the premium prices for organic items.  If we really had a food supply that was only safe and responsible for those able and willing to pay higher prices, that would represent a huge failing of public policy.  Fortunately, that is not the case.  Consumers and farmers with high ideals for the food supply can support farming in the ever-innovative mainstream system as it continues to find ways to farm that are best for us, best for the environment.