Farm Ain't A Thing, Farm Is A Verb

Apologies to John Mayer for the allusion to a lyric from his great song, "Love Is A verb."  Like "love," "farm" can certainly be used as a noun, but in both cases, their essence is best captured in the verb - in the activity.  I bring this up as a continuation of an interesting discussion that has been going on for the last few
days since my last post about why it is possible for so few people to feed the rest of us.  Historian Rachel Laudan raised key questions on her blog about why farming is still mostly a family endeavor and why that matters to us.  Jayson Lusk (an ag economist) responded with a good point that although corporate farms represent a small number of entities, they are disproportionately significant in terms of production.   We might also consider the fact that a great many farms tracked by the USDA are very small, part time operations that contribute very little to overall production.

I think one of the things that complicates the whole discussion around food and farming, is that when we use the word "farm" as a noun, we could be talking about such a huge range of entities. Below I'll try to capture at least one measure of that diversity.

One Measure of the Diversity in Farming 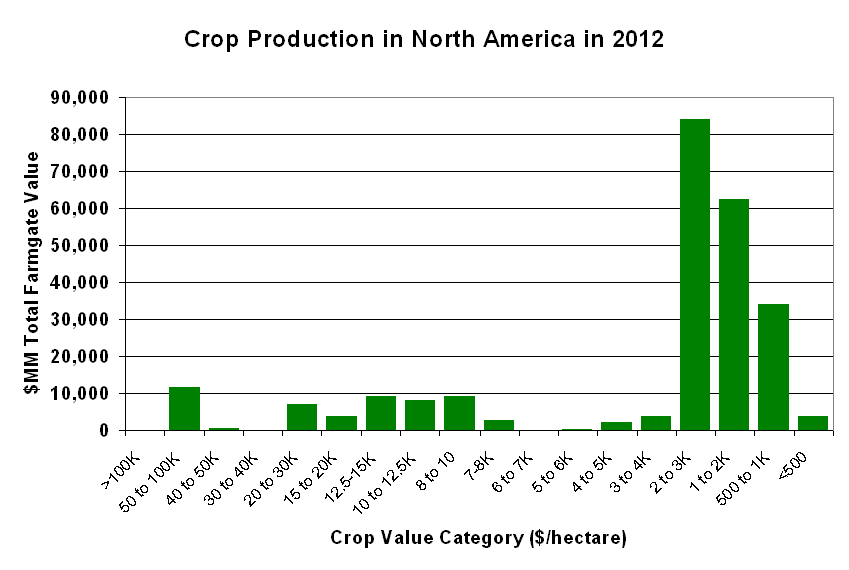 The graph above is about the range of per-area value of crops in North America (using data from FAOStats).  You can see the vast area of relatively low farm-gate value row crops (corn, soy, canola,wheat...) in the $500-3000/hectare range ($200-$1,200/acre).  Then there is another set of crops in the $7-$30,000/hectare range that includes various "specialty crops" like fruits and vegetables.  This does not even capture big differences within a given crop (e.g. irrigated and non-irrigated row crops, berries for fresh market vs freezing...).  There are obviously major differences between the sorts of farms represented here beyond just the value of the crop. 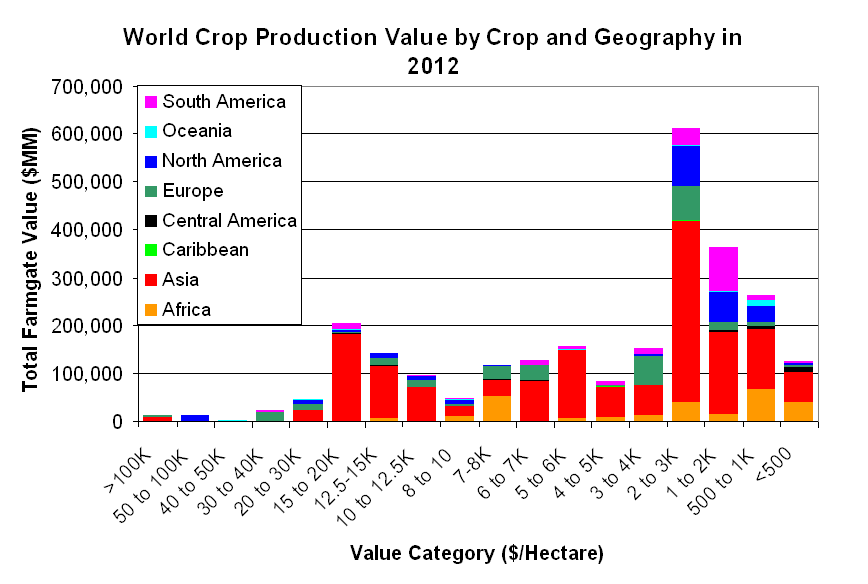 The diversity gets even crazier when we look at agriculture globally where the value is spread over what looks like a tri-modal distribution with a 100+-fold difference in per area value. I'm not sure these stats even capture the super high value/area protected culture industry (shade houses to greenhouses) which is a rapidly growing segment around the world.

To make the discussion even more complicated, these graphs do not even touch on animal agriculture which is not only diverse in terms of species, but also scale.  It includes everything from very small-scale cow/calf operations to large-scale feedlots or laying houses and everything in between.


This brings me back (finally) to my title: "Farm ain't a thing, farm is a verb."  When we use farm as a noun we we might be talking about entities which are not even very similar. But I believe that there is an essential commonality about farming when we think of it as a verb.

As incredibly diverse as as farming may be in terms of value or even of the details of what the work involves, there is a certain universal thread.  It is essentially about harnessing the amazing potential of biology to produce things we really need and/or want.  For most of the people doing that, it is in the context of an environment that can only partially be controlled (as opposed to someone harnessing biology to use biology to produce something in a fermentation vat, and even that is tricky). Perhaps that is why there is some sort of commonality between the "farmers" who actualize the verb in so many different ways.

In my long career, I have had the chance to meet a very diverse set of people who farm.  My introduction to agriculture was via the super high-value wine grape industry in California.  These growers run some intensive operations.  On the other extreme, I've spent quite a bit of time talking with dry-land wheat farmers in Western North Dakota who must use a super low-input approach (I asked one such farmer cooperator to apply our experimental biocontrol agent for Canada Thistle with a 40 gallon/are spray.  He said, calmly: "Son, out here we call that an irrigation.")  Lately, on the speaking circuit, I've had some exposure to dairy and fish farming which is mostly new to me.

My experience is still only with a small slice of what it means to farm, but I can honestly say that whether I am talking with one of those wheat farmers, or with a manager for a 60,000 acre almond operation, it feels like they have the same basic orientation.  They are all people who need to understand the dynamics of their particular biological system and what options they have to try to achieve their goals.  That is true for both organic and conventional farmers, or the common case of farmers who do both.

So I guess the point of this post is not to discourage discussions of farming because they can so easily get confused by the diversity.  I really do believe that there is a common thread in the verb form of "farm" and we food consumers who don't do the verb might do well to listen to the incredibly diverse set of actors that do.

Graphs are mine based on FAOStat data.

Posted by Steve Savage at 9:09 PM No comments: 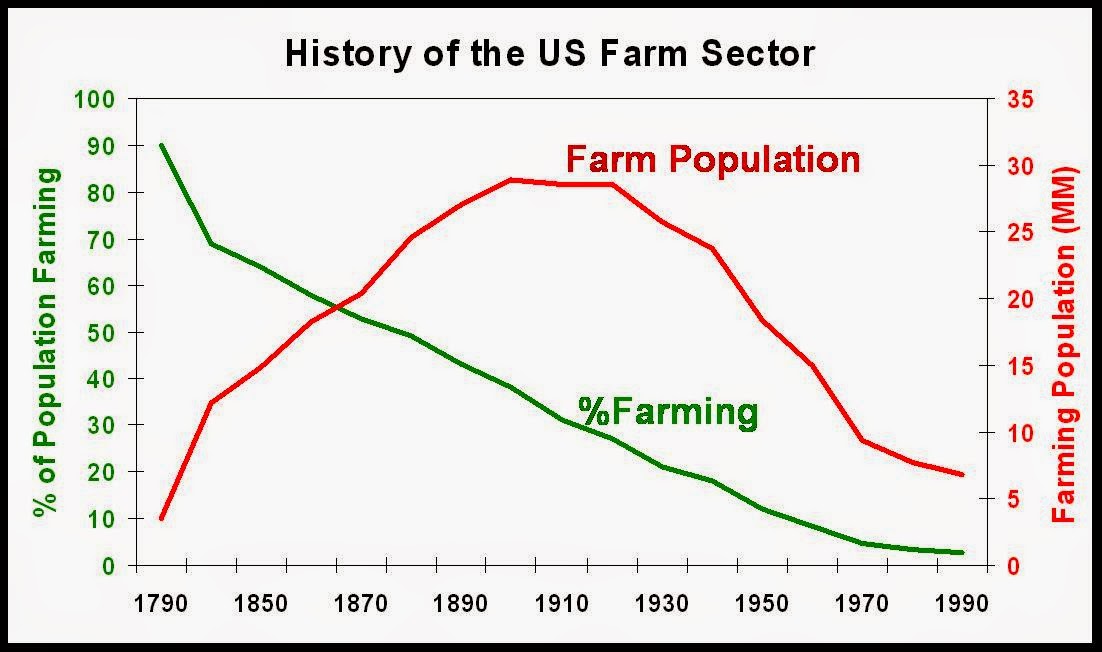 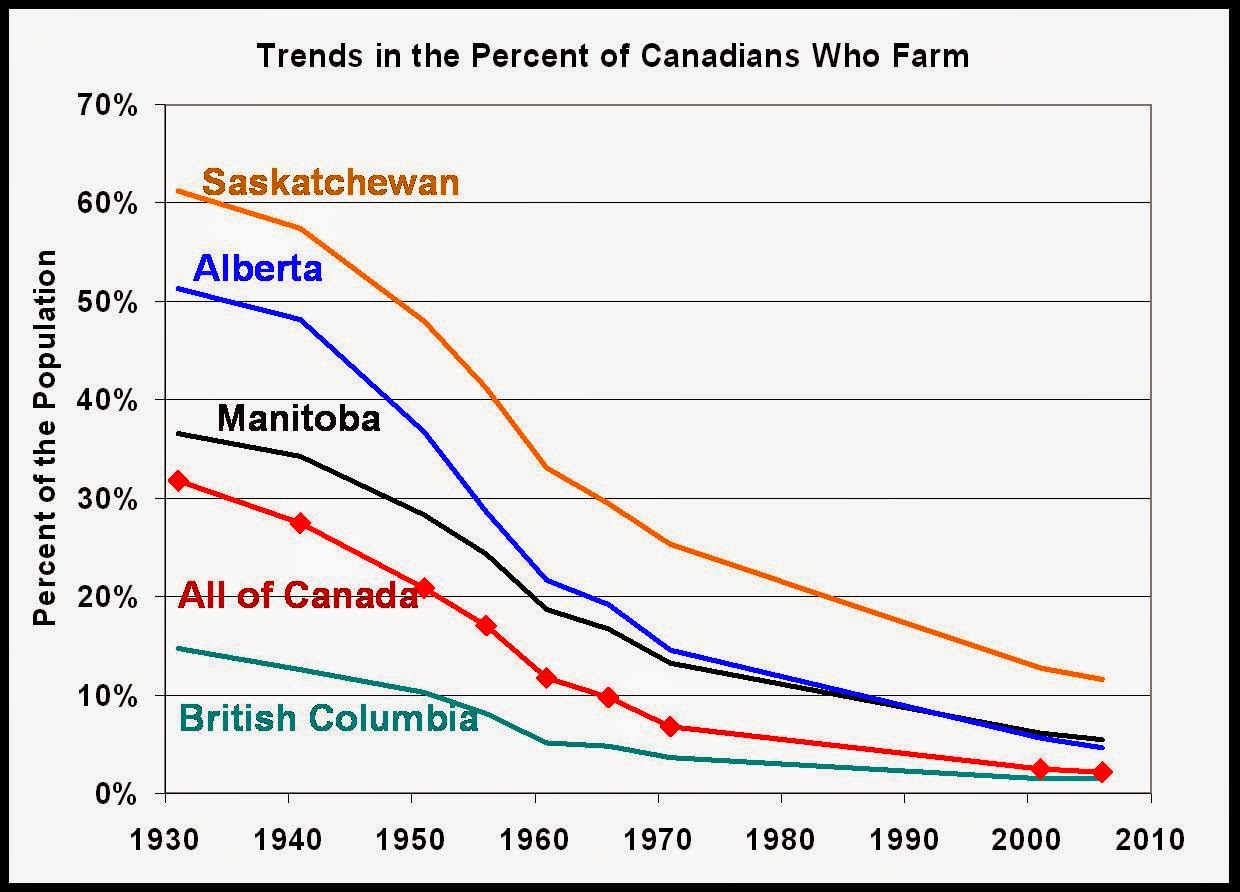 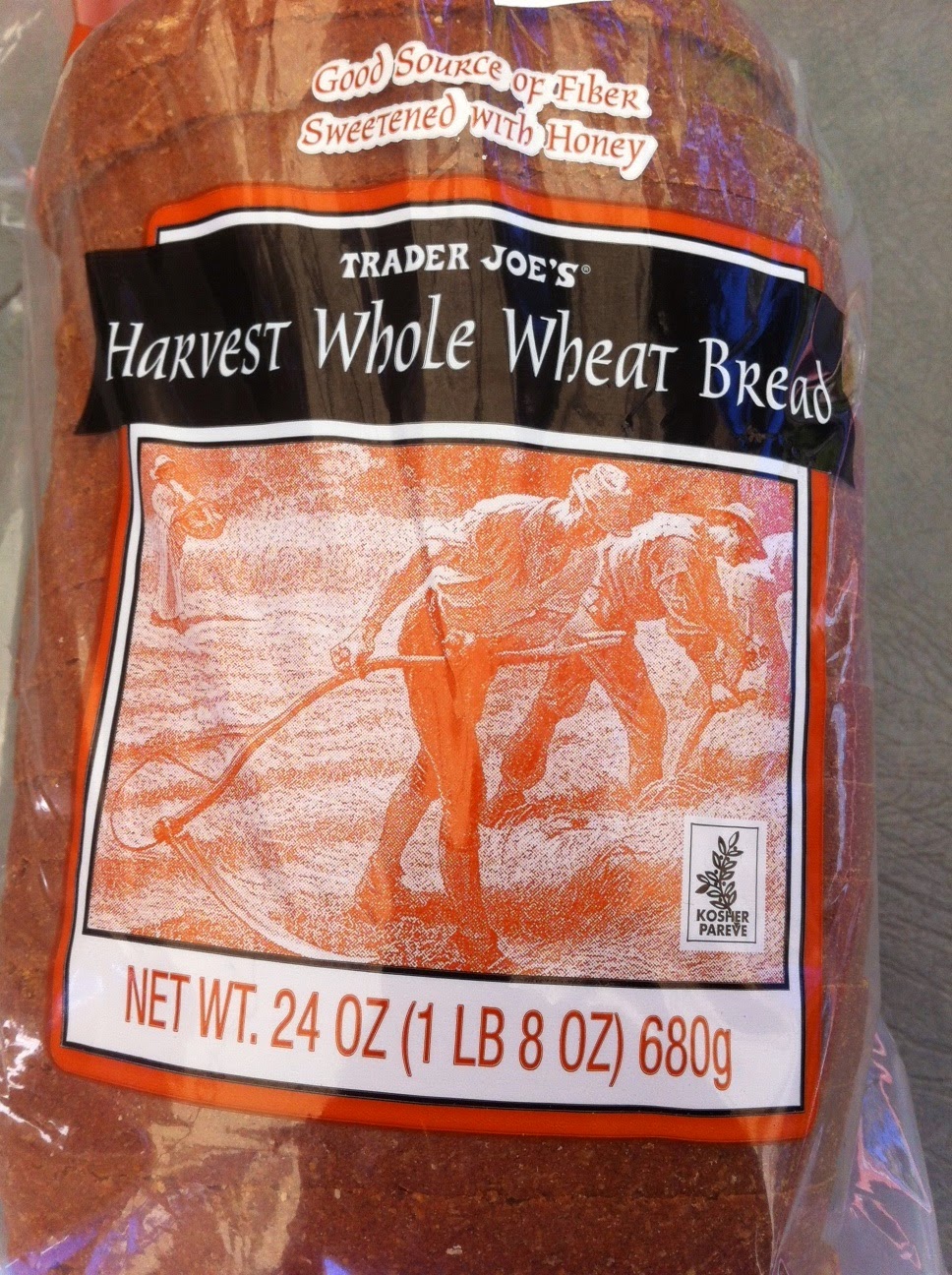 Posted by Steve Savage at 7:34 PM No comments: