What Should We Know About Foreign Genes In Our Food?

(Originally Posted on Biofortified 2/22/12)
In a recent email exchange about the merits of mandatory "GMO labeling," I was asked this question: "Why shouldn't we be able to know what foreign genes are in our food?"  It seems like a reasonable question to most people.  After all, we are the customers; don't we have a right to know what we want to know? The answer to that question is actually a lot more complicated than you might think. Let me explain. What some people find "creepy" about the idea of "GMO crops" is that they contain genes from organisms other than the crop itself - hence the emotive term, foreign genes. Practical speaking, the novel genes in the commercial biotech crops grown around the world have come from either bacteria or viruses. To your average person, that might still sound creepy, but it needs to be put into perspective.  Most people may not know it, but our diet is, and always has beenloaded with foreign genes from bacteria and viruses and other living organisms (yeast, other fungi, nematodes, algae...). We don't live in a sterile world.  In fact there are a host of microbes whose natural role in the world is to grow in association with plants - including food crops.   Except for the case of recently cooked food, these organisms tend to be alive and well when we eat them - genes and all.  I'll give a quick survey of the microbes which one finds on plants and whose foreign genes genes we regularly consume.

The surfaces of all plants, including those used for food, support a rich and diverse community of micro-organisms. Those living on leaves and other above-ground parts of plants make up the Phyllosphere Community (see image above).  These organisms live on the nutrients available on the plant’s surface, and they thrive in the tiny "boundary layer" of humid air that comes from the water inside the plant. There can easily be between one million and one hundred million microbial cells on every square centimeter of plant surface. In a salad you are ingesting microbes numbering in the billions. Washing produce only slightly reduces those numbers, and they can reproduce again given a little time.  Leaves, stems and fruits are loaded with foreign genes from these residents.

There are also richly diverse communities of microbes that live in association with below ground portions of plants (roots, tubers...). These are called "Rhizosphere inhabitants."  Many live in a very close and sometimes even helpful relationship with the plant - protecting its roots from disease causing organisms, helping the plant absorb nutrients, or even supplying certain plants with supplies of usable nitrogen.  Some are also just free loaders and some are microbes that cause diseases. The numbers of organisms here are even higher than on the above ground plant surface, and we can only grow and study a small fraction of these microbes in the lab. Some of these common soil bacteria (strains of Bacillus thuringiensis) are the source for the Bt genes in insect resistant GMO crops (corn, cotton, sweet corn).  Another common soil bacterium (Agrobacterium) is the source of the EPSPS gene in most "Roundup Ready" plants.  Both of these organisms (and all their genes) have always been present on foods that grow in and near the soil.


Microbes and Their Genes Inside of Plants

The inside of a plant is also far from sterile.  There are microbes know as "endophytes" which thrive inside of plants, particularly in the "plumbing" of xylem and phloem.  Some cause diseases of the plant (Fusarium, Verticillium), but many are another class of freeloaders that cause no harm or in a few cases provide a benefit to the plant.  In any case, they and their genes are common elements of our food.

Oh, by the way, our food also carries along lots of genes from viruses (phages) that infect the bacteria that grow on and in it. Many plants are themselves infected with plant viruses (mostly RNA viruses but also some DNA viruses).  Any crop in the crucifer family (turnips, broccoli, cabbage...) can be infected with Cauliflower Mosaic virus - a DNA plant virus which is the source of the "promoter" sequence used in many GMO crops. Viruses have only a handful of genes, but they can exist in huge numbers in an infected plant. Farmers try to avoid having plant viruses in their crops because they can be damaging. Even so, there are mild strains that are tolerated in some crops. Viral genes are certainly a regular part of our diet. There are also things called transposons which are natural sequences of foreign DNA that hop in and out of the plant's chromosomes sometimes disrupting working plant genes.


But Isn't That Different?  Aren't Those Just "Natural, Foreign Genes"?

Yes and no.  The way that plants are cultivated has a big influence on the particular dynamics of microbial associations with the crop above and below ground.  Everything from the way the crop is fertilized or irrigated to the microclimate associated with planting density, trellising etc will change the mix of microbes in play.  For instance, the pesticides or foliar trace nutrients that are sprayed on the crop effect its microbial suite.  There are also quite a few biological control products which comprise live or dead bacteria which are quite intentionally sprayed on a crop in huge numbers to express some of their genes in a way which wards off a disease or insect. These are celebrated as biological pesticide alternatives to synthetic pesticides. For more than 50 years we've been spraying crops with the same sort of Bt protein that is in a biotech insect resistant plant, but the sprayed form includes the bacterium, its other genes and all its other gene products. There are also viruses that infect insects (Baculoviruses) that are intentionally sprayed on certain crops. When compost is used on an organic or conventional field, one of the express purposes is to bring along a huge and diverse population of microbes. These microbes, and their genes, will then be in abundant supply on the roots, leaves and fruit. These may well be "natural" organisms, but there is no natural system in which such huge amounts of such material and associated bacteria etc. are introduced to a plant community. So, human activity has a profound effect on the range and quantity of foreign genes on and in our food.  If it is logical to label genetically modified foods which contain a few foreign genes via genetic engineering, wouldn't it also make sense to label foods that have been intentionally sprayed with a biocontrol product or grown in a compost enhanced soil? Those contain far more foreign genes.


Should Any Of This Be Scary?

Not everything that can be made to sound scary is actually scary. Even though we are eating microbes, their genes, and their gene products on a grand scale, it is almost never a problem. In fact, some of these microbes go on to become part of our own bank of bacteria etc. that live within our digestive system - often to our benefit. Indeed, we eat many foods that are intentionally loaded with microbes: like the ones that convert milk to yogurt or cheese or seaweed to Nato.  This is all just part of our natural food supply. It is a very rare occasion when our incidental bacterial or viral feast includes something that poses a serious threat (certain strains of Salmonella, E.coli, Lysteria...that are actual human pathogens).  Generally speaking, the consumption of foreign microbes, foreign genes, and the products of foreign genes is an unavoidable, but still non-issue from a safety point of view.


How Does This Compare To A GMO Crop?

The biggest difference between the foreign genes in GMO crops and the foreign genes that find their way into food by other mechanisms is that the GMO genes are much more of a known entity.  Unlike the cocktail of microbes that come along in an uncontrolled, unknown, and almost unknowable way with all food, the microbial genes and gene products in a GMO crop are very well understood. We know the exact sequence of the gene, its location in the plant's chromosomes, what the gene does. We know which proteins are made because of that gene and we have been able to study those proteins in detail to determine their safety. With most of the other microbial genes that we are eating we can't say with certainty what is there, how much is there and what all the possible gene products are or what they do. Theforeign genes in GMO crops are different from all the other foreign genes mainly in that we know so much more about them.  So in reality, the genes in a GMO crop are the least creepy of such elements in our food.

Electron micrograph of bacteria on a bean leaf from Iowa State University
You are welcome to comment here and/or to email me at savage.sd@gmail.com.
An index of my blog posts can be found here.
Posted by Steve Savage at 8:30 AM 3 comments:

Global Food Situation: This Does Not Look Good 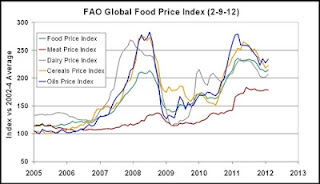 I don't want to be an alarmist, but there seems to be something happening with global food prices that is historically unprecedented and not encouraging. The FAO (Food and Agriculture Organization of the UN) puts out a monthly index of global food prices - essentially an estimate of prices in international trade (see graph above).  After remaining relatively stable for decades, there was a sharp spike in prices in 2007/8.  In that period there were food riots in many countries where the population is highly dependent on imports and where they spend a large percentage of their family budget on food.  That peak ended abruptly by 2009 as farmers around the world responded to the high prices and produced more.  However, in late 2010 another spike occurred.  That one has been receding since mid 2011; however, the retreat was much slower than the previous cycle.  In January estimates released on 2/9/12, the combined index and its components have once again begun to rise.

Some of the articles written about this describe it only as a rise after a 6 month decline.  What that analysis misses is the disturbing fact that the decline did not even come close to returning to the previous baseline.  This is easier to see by overlaying the data for the last 12 years in three year "cycles." (see graph below) 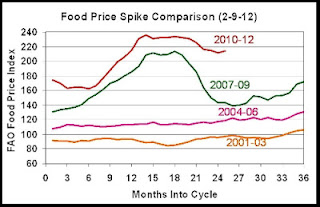 What we see is that between 2001 and 2003, and between 2004 and 2006, the Food Price Index rose by something like 10 points or just a few points/year.  The 2007-9 period involved the big spike, but returned to a fairly "normal" trajectory by the middle of the third year.  However, by the end of 2009, the index more than 50 points over what it was when this cycle began in 2007.  For the 2010-12 cycle, the index now seems to be on the rise and is already 50 points over where it began.  By the end of this year it could easily be far higher.  It is possible that the January rise is a blip, but it could also be additional evidence of an acceleration in the basic rise of food prices.  We will have to see what happens.

Farmers are certainly still responding to higher prices by trying to produce more, but frequently the weather works against them.  Some of this is also related to government actions like export bans.  Many have cited a role for commodities speculators as well.  That this is a complex issue is a given.  In any case, this does not bode well for the world's poor.

You are welcome to comment here or to email me at savage.sd@gmail.com.  There is an index with links to all my blog posts here.