Whole Foods Wants To Sell You Slower-Growing Chicken. That Is Probably A Bad Idea 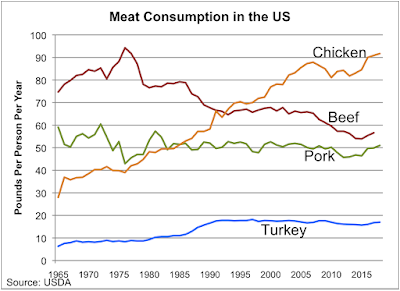 One challenge of being a modern food consumer is knowing what to believe or not believe in terms of food production narratives. There is a new campaign claiming that going back to older, slower growing chicken breeds is the right thing to do. There are some good reasons to reject that idea.

Most Americans enjoy eating chicken. On average we each consume about 90 pounds per year, a three-fold increase compared to per capita consumption in 1960. Chicken producers have kept up with this increasing demand even as our population has also increased. What was once a luxury food has become a very affordable option. Chicken remains an economically attractive choice for consumers, in large part because of increases in the production efficiency of modern chickens. Particularly in the last century, chicken farmers have consistently mated their best roosters with their best hens and steadily shifted their flock genetics towards more and more efficiency. Today, chickens are the most efficient of our meat animals in terms of how much grain it takes to produce each pound of final product. That also means more efficiency in terms of water and land use. Overall, this history is a good example of increasing sustainability.

While this progress has been a positive for consumers and the environment, there are some advocates saying that we should go back to using earlier, slower growing breeds of chickens. They claim that the rapid growth compromises the welfare of the birds and that slower growing chickens are a more ethical choice. The slow growth argument is that the weight gain of the chicken has outstripped its bone development so that the chicken becomes physically compromised, at least in the case of the birds kept around longer as breeding stock. In a recent article by Dan Charles for NPR, that concern seemed to be supported by William Muir, an independent animal science expert from Purdue University. I wrote to Dr. Muir and he said he had been misquoted. He and other industry experts say that chicken breeding has been simultaneously focused on weight and bone strength.

By several objective measurements, modern chickens seem to be better off. Mortality rates are down substantially. The houses in which chicken are raised have better climate control and the flocks are protected from disease by vaccination.   Antibiotics were once used to improve gut health but that practice has been phased out. As of 2017 there is no longer any feeding of dual-use, animal/human antibiotics for growth promotion in chicken. This website has a helpful video about how chickens are raised.

The upscale grocery retailer, Whole Foods, is asking its suppliers to make the switch back to slower growing breeds. Some animal rights groups are putting similar pressure on the companies that supply chicken to restaurants. Is there really a conflict between sustainability and animal welfare when it comes to our most popular meat?

As consumers we would be wise to be skeptical about the assertion that fast growth is bad for the birds. Not everything you hear about chickens is true. For instance many consumers have been convinced that they should buy chicken labeled as not having added hormones even though no chickens are given hormones and haven’t since the 1950s.

Last week the National Chicken Council released a detailed report about what a change to slow-growing birds would mean in terms of resource-use and production costs. I pulled out some of the statistics that were most compelling to me as a crop scientist. In the hypothetical case that one third of the chicken industry switched back to slower growing birds, it would substantially reduce the overall supply of chicken for only a 14 day change in the growing cycle of the birds. The drop in feed-use-efficiency would mean that 33.5 billion more pounds of feed would need to be devoted to chicken production which would represent 670,000 tractor trailers full of grain. Currently each acre of grain (corn/soy) can feed 344 birds. The same amount will only feed 224 of the slow growing birds. That would translate into 7.6 million acres of farmland needed to support a 1/3 conversion. There are also ramifications for water use, the amount of manure produced (28.5B pounds), and of course the cost ($9B at the producer level and much more at the consumer level).

NCC is encouraging the foodservice and retail industries to fully consider all the economic and environmental ramifications of a potential change in chicken genetics. They are also supportive of research to objectively evaluate questions about animal welfare and health as effected by growth rate.

It is likely that some food industry players could profit from the creation of another up-sell category for meat. However it is appropriate to ask whether that is indeed a responsible path to take. Consumers have good reason to think this one through before going along with this marketing campaign.

(Just to show that I take my chicken seriously, here is my favorite recipe for home made, dry rub chicken) 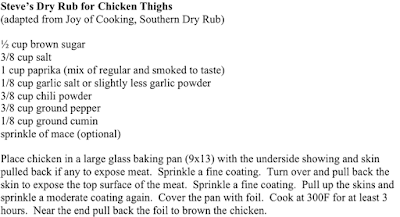 Posted by Steve Savage at 10:00 AM No comments: