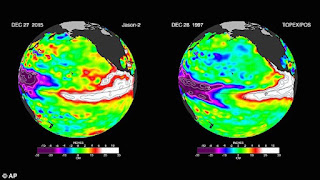 (This post originally appeared on Forbes on 1/7/16)
It's raining hard here in Southern California for the second day in a row. After four years of drought it's a welcome change, but it's also causing problems. Again today my cell phone sounded an alarm for flash flooding, and the areas affected by previous fires are in real danger of mudslides. We are predicted to get a substantial amount of precipitation from one of the strongest El Nino events in a very long time. Still, the experts tell us that this one season will be unlikely to overcome our water woes. 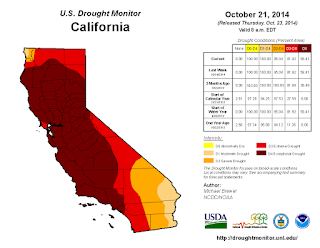 For a very long time, California has been able to provide water for her cities and farms even though generally there is no rain for a long period between late spring and fall. The Mediterranean climate is not only enjoyable, it makes the growing of crops easier because they only get the water we want them to have during the growing season. Unfortunately, our municipal and agricultural systems have depended heavily on being able to store a great deal of water in the form of snow in the high Sierra mountains. When that snow-pack does not develop, we don't have the reservoir capacity to store enough to cover our needs through the dry season. 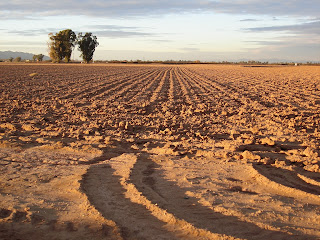 Over the past several years there have been cut-backs on water deliveries to irrigation districts in order to have some supply left for cities and for environmental needs in terms of at least some minimal stream flows.  The farmers have cut back on planting of annual crops so that much land is left fallow.  However, a great many California crops are perennial trees and vines that have to be watered to keep them alive.  Increasingly, farmers have been tapping into ground water using existing or new wells.  This can only be a temporary solution because the aquifers are being drawn down making pumping costs higher and risking salt water intrusions.
In the past, ground water has not been regulated to any great degree here in California. As the recent drought intensified, it has become obvious that some system needs to be implemented to make sure that our groundwater can be managed in a way that is equitable and sustainable. But that requires knowing a lot more about what is happening down below, and as the saying goes,  "you can't manage what you can't measure."  We are lacking the historical data to guide such a system. Fortunately, there is a program being piloted in our state by a diverse set of public and private forces which uses state-of-the-art technology to track groundwater in a way that was never before possible. 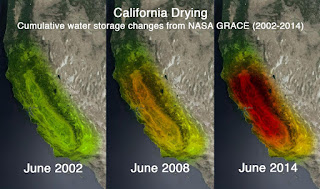 A couple of months ago I had a chance to interview Carl Ganter from the foundation-funded non-profit, Circle of Blue which has been active in the water arena for some time. They have teamed up with the folks at NASA’s GRACE program (Gravity Recovery and Climate Experiment) which monitors small gravitational variations in the Earth from space. These are indicators of things like changes in ground water and allow us to "see" what is going on. Scientists at the University of California, Irvine are also part of that effort. Twitter is getting actively involved in providing “ground truth” such as data about pumping depths that are being experienced. The Columbia University Water Center and the Pacific Institute are also involved more from a policy perspective. Qlik, a company with data dashboard and business intelligence experience, is combining all this input and working out a way to make it comprehensible for all the stakeholders like government regulators, farmers and municipal water districts. This is another great example of a public/private, for-profit/non-profit partnership seeking to accomplish something none of the entities could do alone.
The hope is to have this “dashboard” of information specific to California live within a year or so. Then, the plan is to move on to other key regions like the Ogallala Aquifer and to the Southeastern US. Then the experience will be used to better visualize other critical aquifer issues throughout the rest of the world.
Being able to visualize our ground water won’t in and of itself solve our California water situation.  The experts warn that it will take more than one wet winter to recharge our aquifers.  We need to be doing some serious work on how to balance our water needs for the cities, the farms, and for environmental needs. These are contentious topics, but hopefully better data on the ground water aspect can help to inform a constructive approach.
You are welcome to comment here and/or to email me at savage.sd@gmail.com
Posted by Steve Savage at 7:43 AM No comments: