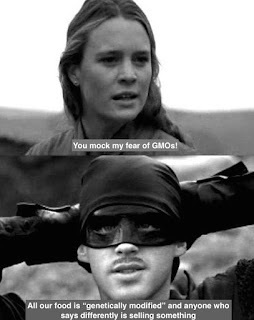 Posted by Steve Savage at 11:33 AM No comments:

On Memorial Day my sister and brother-in-law took me to visit an extraordinary commercial nursery West of Chicago called “The Planter’s Pallet.” There I saw a huge and diverse collection of ornamental species and varieties destined to grace the yards and gardens of local plant lovers. I was inspired both by the astonishing range of form that nature provides, but also by the co-creative role of mankind in amplifying that diversity in ways that appeal to our human enjoyment of color, shape, texture, aroma and even sense of humor. As someone who often wrestles with weighty questions like the role of “GMOs” in the future of the food supply, it was a delight and a relief to be reminded that humanity has a long tradition of tapping into, and “messing with” nature’s diverse offerings – in this case for purely esthetic enjoyment.

None of the beautiful and interesting specimens I saw in that nursery today had been “genetically engineered” using the tools of transgenesis that were first developed in the 1980s, but most of the examples had certainly been “genetically modified” using a variety of other, “conventional” methods, resulting in far more dramatic changes at the DNA level – changes that no one has probably ever even tried to document. I doubt that some of these plants would even survive on their own for long under natural competition and stresses without human care. They won’t need to. I’m quite sure that none have been safety tested in any way or scrutinized for their potential to become invasive weeds. No one was asked to justify why many of the varieties are patented or sold under exclusive brands. Indeed - this delightful nursery seemed to be “controversy free.”

I certainly wouldn’t want to see these examples of genetic modification become controversial. I’m just glad to have been able to enjoy and celebrate these beautiful, desirable examples of the synergy between long-term evolutionary diversification and relatively recent human ingenuity. Genetic modification can certainly be fun and beautiful.
I'll be doing a series on this topic to talk about other examples of how we humans have done many creative and useful things via genetic change.

Posted by Steve Savage at 8:10 PM No comments: