A Fishy Attempt To Link Glyphosate and Celiac Disease


Stephanie Seneff (a computer scientist at MIT),  and Anthony Samsel (a retired consultant), have recently been attempting to link the use of the herbicide glyphosate to a long list of modern maladies. Their latest such attempt to is Celiac disease.  The overall argument for the glyphosate/Celiac link has already been quite thoroughly debunked by a Celiac expert, but there is one other good reason to dismiss the "link" which I would like to describe.  It has to do with a "Fishy" study about glyphosate and fish which is so flawed that it should never have been published in the first place.  That is why it can't be used to support this chemical/disease link.


Samsel and Seneff cite a publication by Indian scientists from 2009 (Senapati et al). In that study, ugly effects were observed in the digestive track of the fish that were exposed to water containing a glyphosate-based herbicide.  Such a finding would be surprising, because for decades, glyphosate has been a preferred method of weed control in aquatic settings, specifically because it has unusually low toxicity to fish and other aquatic organisms.  Glyphosate is particularly valued by the people who are trying to control invasive weeds in wetlands, lakes etc. as described here for CA, WA and FL.  They spray it on the part of the weed that is above the water because that is the only way it is effective, but obviously some glyphosate gets into the water.  Still, this use has long been considered to be safe for fish.  Did this paper document a previously unrecognized issue?

In their analysis of the Indian fish study, Samsel and Seneff concluded that the effects observed on the fish digestive systems were "highly reminiscent of Celiac disease." To me, the effects sounded much more reminiscent of surfactants.  Fish are very sensitive to those.

When I read the Senapati article, it quickly became obvious that this was indeed the problem.  These researchers specifically stated that they used a commercial formulation of glyphosate manufactured in India called Excel Mera-71.  A quick web search shows that Mera-71 is a formulation made for terrestrial, not aquatic use. The manufacturer describes it as containing glyphosate and "a blend of non-ionic and cationic surfactants." At least in the US, products registered for use on weeds growing in water do not contain surfactants because surfactants are well known to injure fish. There was no surfactant control, so the reviewers of the Senapati study should never have let them conclude that the effects were from exposure to glyphosate. It is much more likely that the fish were injured by the surfactants.

There were other experimental design problems with the Senapati study.  They chose to put the fish into water containing 4mg/L of glyphosate.  To achieve that sort of concentration by spraying weeds in even shallow water would have required spraying the weeds above the water at many times the maximum rate allowed. (Here is an EPA label for a glyphosate product for use on weeds in water - AquaMaster). Then, to make matters worse, the water in which the fish were being kept was replaced every other day for 45 days with a fresh solution of 4 mg/L glyphosate along with the inappropriate surfactants.  That would not correspond to any imaginable use-scenario in the real world. So basically, Senapati et al abused several poor fish for more than six weeks to demonstrate what was already well known - surfactants hurt fish.  The only thing remarkable about the study is that the fish even survived. Glyphosate is still a good option for the control of aquatic weeds.  No, it does not cause Celiac.

Some Additional Thoughts About The Scientific Process


This study was a "literature-only" review which involved no actual experimentation.  That can be ok.  The literature is there to be the subject of scholarship.  On her own web page Seneff explains that she places her work in the "open access journal," Entropy, because it is "willing to publish novel hypotheses," and because  "the papers are subjected to rigorous review by experts who were not beholden to industry influence."  That can be ok too as the making of hypotheses is the starting point for the scientific method and unbiased reviews are important for science.  However, if one is going to attempt to do science this way you can't assume that every paper you find actually shows what it claims to show, even if it's what you would like it to show.   If these authors wish to review papers this far outside of their own discipline and training, they would do well to confer with people more familiar with these topics. I would be happy to recommend such resources for future publications.

In science, even when research is published in a "peer reviewed" journal, that does not finish the vetting process.  Particularly if some new finding challenges previously accepted ideas, the next stage is critical.  Does the work hold up to scrutiny by the broader scientific community?  Can the results be repeated by others?  The Senapati and Samsel /Seneff papers fail to pass these tests.  Researchers that are really trying to understand conditions like Celiac disease will continue to look at other, more likely causes.  Unfortunately, in the extensive, anti-technology sector of the internet, this new "link" will likely live on and joint the list of other myths about food and agriculture.

Posted by Steve Savage at 10:12 PM No comments:

Thoughts About Norm Borlaug on the 100th Anniversary of His Birth 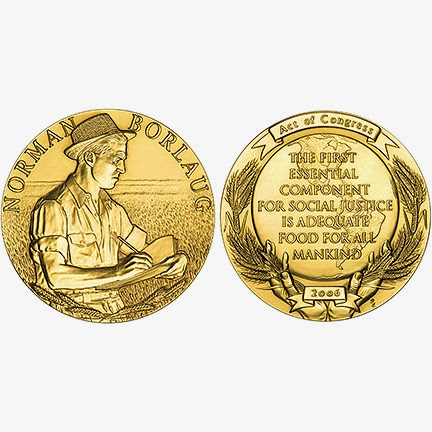 Norman Borlaug would have been 100 years old today.  He has been called "The Man Who Fed The World," and "The Father of The Green Revolution."  Norm Borlaug was the first plant pathologist to be awarded a Nobel Prize (1970) - for contributions to world peace. For all of use who are fellow plant pathologists, his work has been particularly inspiring.

It is a good time to look back at how the challenge of feeding the world population was met during Borlaug's career, because we have a similar challenge ahead of us. The chart below shows global population from 1950 with a projection to 2100.  I've been looking at food production data available from the UN Food and Agriculture Organization (FAOSTAT).  If we look at the half century since FAO started tracking it in 1960,  global population increased by 3.89 billion.  Between 2010 and 2060, global population is projected to rise by another 3.04 billion. Between 1960 and 2010, production of most crops did manage to keep up with population growth and for many crops there was actually more available per person in 2010 than in 1960.  Living standards also improved in many parts of the world, which meant that people were able to enjoy that per capita increase.  Fertility rates have declined with the education of women combined with improvements in living standards and food security. It is projected that global human population will level off by around 2100 due to these factors.

The increase in food production during Borlaug's era was mostly achieved through increased yield on each acre or hectare grown, not from farming more land.  That was made possible by agronomic improvements,  including the breeding advances that came from the work of Borlaug and many others. 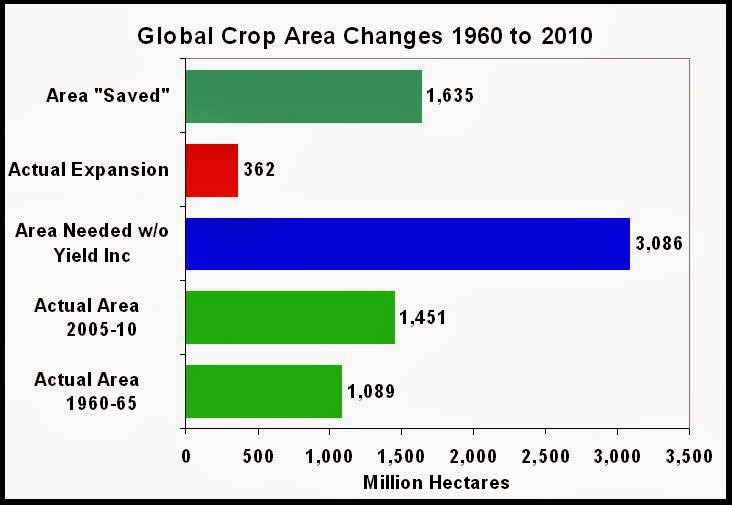 In the graph above, the two bottom, green bars show the global crop area in the window 1960-65 (1.09 billion hectares) and 2005-10 (1.45 billion hectares).  The increase, shown in the red bar, is 362 million hectares. That is an enormous amount of land, but without increased yield, it would have taken nearly 3.1 billion hectares (blue bar) to have provided the amount of food that was available to the world by 2010.  That effectively means that the global farming community, and those that aided it with technologies, advice and expertise, "saved" more than 1.6 billion hectares of land from being converted from a natural state into farmland.  Realistically, there is not that much land which could ever be farmed. 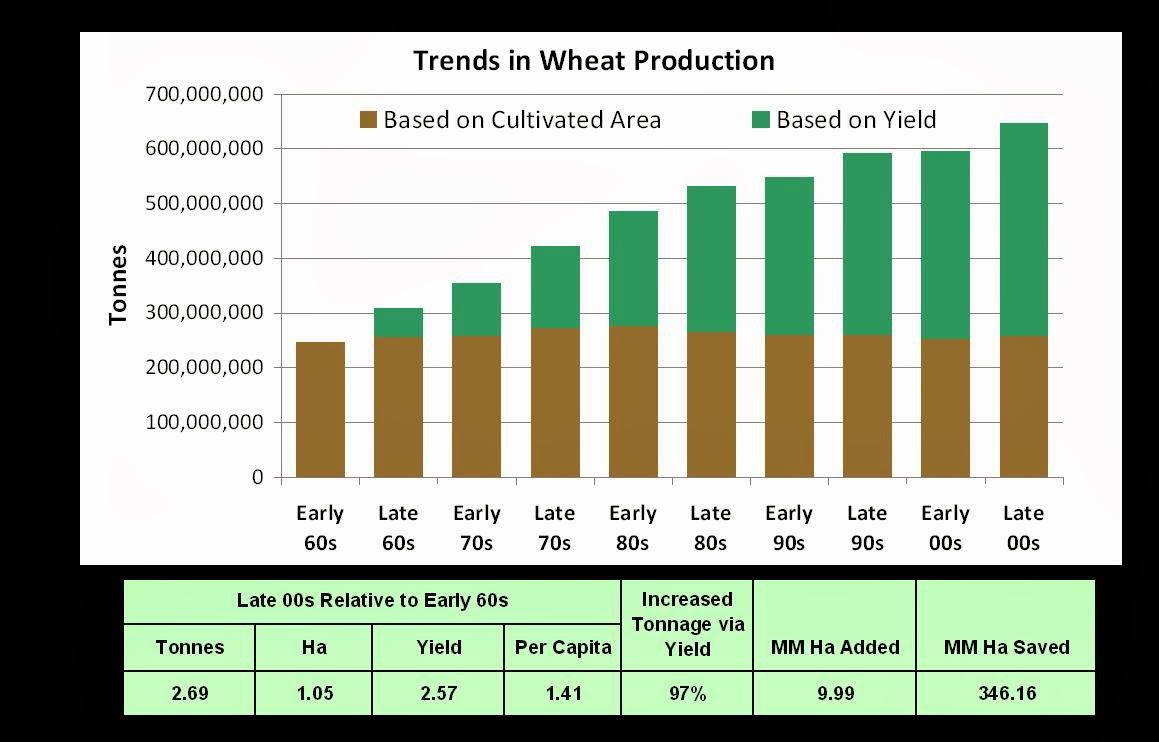 Many of Borlaug's contributions were to the staple food crop - wheat.  Wheat is not a single crop, but a collection of many different types of wheat grown for different kinds of food ranging from hearty breads, to pasta, to crackers, to flat breads to soft noodles. By the end of this 50 year window, the world's wheat farmers were producing 2.69 times as much wheat as in 1960. However, 97% of that increase (green part of the bar) was enabled by higher yields.  Only 10 million more hectares were being grown. That meant that the world could continue to have enough wheat without the need for adding 346 million more wheat hectares.  That is the legacy of Borlaug and the other participants in the Green Revolution. 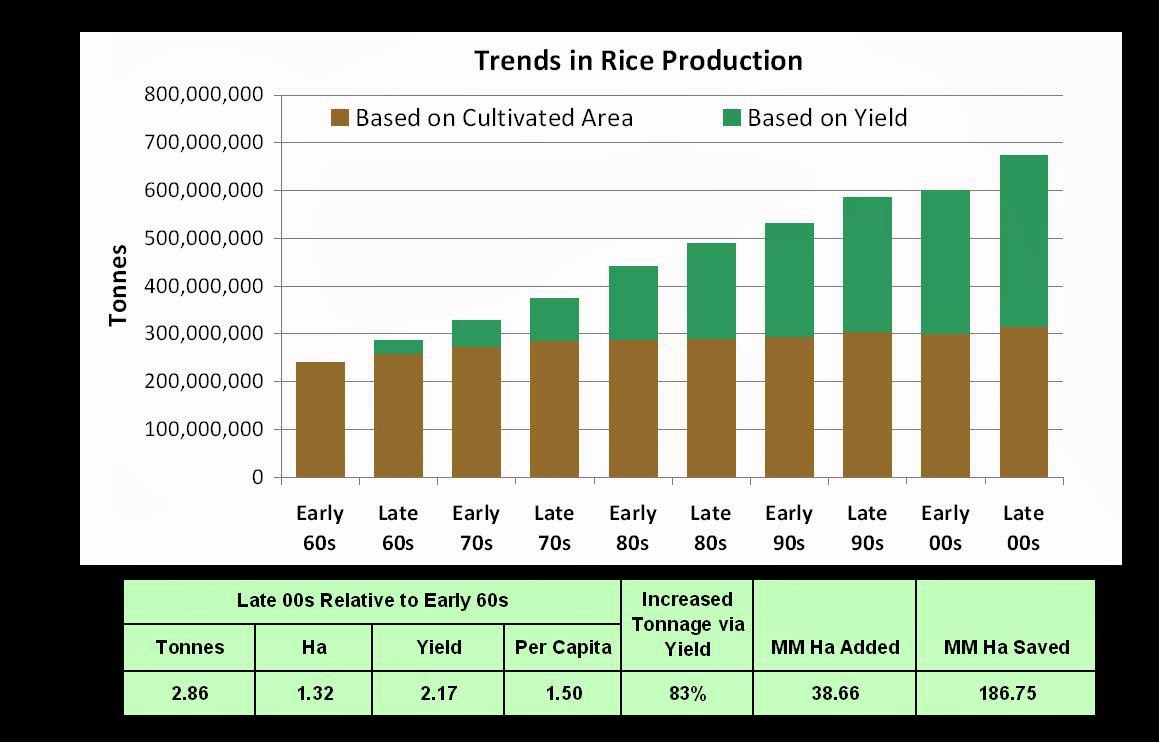 The story with rice is almost as positive.  In 2005-10, humanity had access to 2.9 times as much rice as in 1960-65, and 83% of the increase was attributable to yield with 39 million new hectares added.  That meant that there were 187 million hectares which did not need to be added to the rice production base.

The story behind these higher yields is complex and varies across geographies. The details of how we might continue this sort of progress through 2060 are also complex and will involve new challenges such as climate change.  Even so, on this important anniversary it is fitting to look back at the remarkable accomplishments of the past to find inspiration for the challenges of the future.  Lets hope that at the 150th anniversary of Norm Borlaug's birth people will once again be able to look back and tell this kind of story.  A story about humanity continuing to be fed, but without having had to add much if any new farmed land.  Even into his 90s, Borlaug continued to be an articulate proponent for letting farmers use the full toolbox of technologies, including biotechnology, to pursue such goals.  Now its up to us to continue to make that case.

Image of the Norman Borlaug Congressional Medal from Wikimedia Commons.  Graphs mine based on FAO and Geohive data.

Posted by Steve Savage at 8:00 AM No comments: