(This post originally appeared on the PPIP Blog)
We frequently see a contrast drawn between what is “natural” and what is “chemical.” Sometimes products are described as “chemical-free” even though every physical object is made of chemicals. As much as this suggests a problem with our science education, it speaks to a missed opportunity for wonder. Nature is not some sort of cosmic mother figure; on the contrary, nature is composed of diverse biological and physical processes, including some pretty amazing examples of chemistry continually taking place. If we indulge the human personification of nature and it’s “children” a bit, we could say the following about these “chemists:”
I’ll give a few examples below.

The diversity of naturally occurring chemicals is staggering. Humans regularly take advantage of this, particularly when we need ideas for things like pharmaceuticals or crop protection products. Sometimes we extract the chemicals from a plant or other living thing. Often we grow tanks of microbes to harness their ability to make a chemical we find useful. In cases where the amounts of the chemical are too small to be practical from the natural source, human chemists can synthesize the same compound to fulfill the quantity needed. An example of this is a new potato sprout inhibitor. In many other instances, a natural chemical serves as the inspiration for human chemists to experiment with similar structures leading to the discovery of particularly useful drugs, fungicides, etc.
Food plants also make some fairly toxic chemicals. The seeds of many familiar crops, including apples, cherries and peaches to name a few, contain a chemical storage component called a cyanogenic glycoside. When the seed is damaged, enzymes release hydrogen cyanide from the glycoside. Hydrogen cyanide is very toxic! It is a good reason not to eat those seeds, although it would take a lot of such seeds to hurt a person. The capsaicin that we enjoy in hot sauce is an insect protection chemical made by the pepper plant to defend itself. It is moderately toxic to us but not at the doses we normally consume. Quite a few plants make nicotine to ward off insects including tomatoes, cauliflower and eggplant. Nicotine is very toxic but not at the doses these crops produce. As with any toxic chemical, natural toxins are only an issue to humans at a certain dose.

Some natural chemicals, however, are extremely dangerous and we don’t want those in our food. Mycotoxins are a particularly nasty category of natural chemicals produced by certain fungi. One such chemical, called aflatoxin, is among the more toxic chemicals in existence and is also a potent carcinogen. Unfortunately, under certain circumstances, fungi can produce aflatoxin in food crops. In the developed world, a system of controls and testing keeps us well protected from this; in the developing world, though, aflatoxin is a major cause of death both through acute and chronic effects because it contaminates staple foods like corn or groundnuts.

Some natural chemicals are elegantly selective in their toxicity. A soil bacterium, called Bacillus thuringiensis (usually called “Bt”), makes proteins that are specific in their toxicity to only certain categories of insects. One strain of Bt makes proteins that only effect beetles while another’s toxin only affects caterpillars. None of these Bt proteins are toxic to humans or almost anything else. We have made excellent use of these natural chemical toxins as sprayable insect controls and by genetically engineering plants to make their own supplies of the protein resulting in the plant being insect resistant.

you are welcome to comment here and/or to email me at savage.sd@gmail.com
Posted by Steve Savage at 3:24 PM No comments:

The Many Ways Farmers Control Pests


Whether a farmer is growing in an organic or conventional system, his or her crop needs to be protected from damage from plant pests (insects, fungi, bacteria, viruses, nematodes, weeds…). To fail to minimize pest damage leads to inefficient use of scarce resources like prime farm land, water, or inputs. The quality and safety of the final products can also be compromised.
While materials we think of as “pesticides” play an important role, modern agricultural pest management depends on a combination of several tools and strategies which, when used together, offer a more resilient, economic, and effective means of crop protection. Though some of these practices have been part of traditional farming, many are more recent innovations. The explicit design of these multi-strategy programs began in the 1970s, and the approach is now widely adopted as integrated pest management (IPM). The optimal IPM program varies widely by crop and geography; this post will describe some examples that highlight the various components. 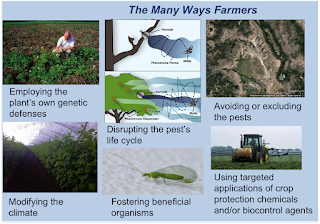 The approaches used to implement IPM programs generally fall into six categories:
A brief introduction to each of the six approaches follows with additional links to the more detailed presentations. Each post will link back to the list above.
Not all pests occur in all places either because they have not spread there or because they cannot flourish in the climate of a given region. Both of these limitations have been historically important factors to consider when deciding what crops to grow where, and these pest limitations continue to be important considerations for farmers. Long-term, this strategy is limited by climate change and by the extensive movement of people and goods around the world
2. Employing the plant’s own genetic defenses
Plants fight back against pests by evolving a variety of defensive strategies controlled by genetic traits. Built-in genetic resistance is an attractive form of pest control for farmers, but it is a resource that requires considerable effort to employ and stewardship to maintain as an effective part of an IPM program. For some crops, farmers can maintain a seed bank of genetic variation and draw upon it to keep ahead of the pest’s inevitable tendency to evolve around plant defenses.
When genetic resistance is available, it is generally wise to complement it with other IPM elements, such as pesticides, to avoid losing the valuable traits. For many crops, conventional methods of breeding are too slow and/or complex to easily employ genetic solutions. Traditional and advanced grafting approaches offer a dual plant genetics approach that has been quite useful in many systems. Advancements in biotechnology allow farmers to use same-species resistance genes in hard-to-breed crops as well as novel genetic approaches that have shown considerable benefit in the few cases where they have been allowed to-date.
3. Modifying the climate
In some cases, farmers can shift the microclimate in which the plant is grown enough to reduce the threat of certain pests. Various degrees of protected culture have been widely used to shield crops from rain and/or to shift the temperature regime to extend the growing season at either end. The nature of the plant canopy can sometimes be managed to reduce humidity, increase light or otherwise create a microenvironment that is suppressive to certain pests.
4. Disrupting the pest's life cycle
Several strategies for pest control center on making it more difficult for the pests to reproduce. These range from crop rotation to insect pheromones to removal of damaged or infested plant parts. Other approaches involve the release of male insects which are sterile so that the females with which they mate do not produce any offspring.
5. Fostering beneficial organisms
Even pests have pests, and often there are ways that farmers can encourage these natural enemies to help keep pest populations low enough to obviate the need for other control measures. Sometimes, it is possible to actively produce and add the bio-control organisms to the system.
6. Using targeted pesticide applications
Farmers can use a wide range of crop protection agents as part of an IPM system. In a great many cases, these agents are low hazard options in terms of environmental, beneficial, or human impact, but the use of all such agents is highly regulated on a national and state level. These crop protection agents are often important for preserving the utility of other IPM approaches, particularly genetic resistance. Farmers have many economic and practical incentives to only use these materials on an as-needed basis.
Pest control in agriculture is a multi-dimensional effort, and pesticides are just one of the important tools that farmers employ. Some of these tools have been in use for a long time and some are new. With climate change, the control of pests will become even more difficult. As the global population grows and standards of living increase, it will be even more important for farmers to avoid the sort of losses and food waste that pest cause. Fortunately, the toolbox available to fight pests is diverse and constantly improving.

Posted by Steve Savage at 12:44 PM No comments: