The Shocking Carbon Footprint of Compost 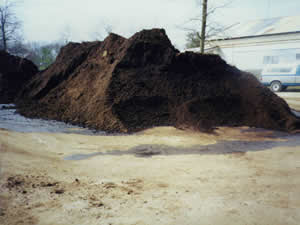 Most people think of composting as a very "green" thing to do, but few realize that composting actually generates a significant amount of the potent greenhouse gases (GHG), methane and nitrous oxide.  Under current landfill regulations, requirements to exclude water minimizes the breakdown of organic matter and requirements to capture and burn methane mean that even that option has a better carbon footprint than composting (thanks to Fred Krieger for pointing out this advance in the landfill arena).  The even better option is anaerobic digestion which I will describe at the end of this post.

These Emissions Are Not A Scientific Surprise

To a microbiologist, it is not surprising that these gases would be generated during composting. Methane and nitrous oxide are formed by certain microbes when there is not enough oxygen available (anaerobic conditions). In the middle of a large-scale compost pile there are micro-sites without oxygen. This occurs even in a pile turned frequently for aeration. This is particularly true during the "hot" phase of the composting process which kills pathogens and weed seeds. During the period of very high oxygen demand, some parts of the pile will run short and the anaerobic organisms will make methane and nitrous oxide. 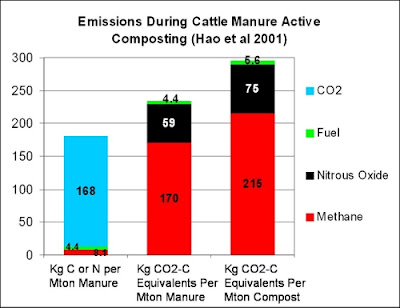 The graph above is based on one typical study of GHG emissions during composting (Hao et al 2001).  This was from active composting of cattle manure - a common procedure in which the pile is aerated by turning it frequently using a tractor (its fossil CO2 emissions are shown in green above.)

The first column represents how much carbon or nitrogen was emitted in various forms per metric ton (Mton) of manure. We can't even see the 0.19 kg nitrous oxide-N at this scale. Methane is 8.1 kg C and the fuel is 4.4 kg C.

The second column shows how much the emissions contribute to a net increase in greenhouse gases in the atmosphere (Carbon dioxide is "carbon neutral" because it was recently pulled out of the atmosphere by a plant - thus no net GHG contribution.  Methane and nitrous oxide are multiplied by 21 and 310 respectfully because of their higher radiative forcing potential).

The third column shows the GHG contribution per metric ton of finished compost (after 21% loss of mass - much as water).  The total "carbon footprint" of the compost is now 233.4 kg CO2-C/Mton.  For those more familiar with English units and expression as CO2 this would be 2167 lbs CO2/Ton.

How Much Compost Is Typically Used?

When compost is used in farming, it is normally applied in large quantities.  According to the University of California, Davis cost and return studies, a typical organic crop would receive between 2 and 10 tons of compost per acre.  Thus a mid-range use of 5 tons/acre would represent a carbon footprint of 10,833 pounds (CO2 equivalents).  This is without including the fuel footprint of hauling the compost to the field and spreading it.

How Big Is That Footprint?

To put this in perspective, the carbon footprint of this amount of compost used on one acre of a crop would be equal to the various other carbon footprints described below:

In other words, the footprint of the applied compost is shockingly large.  It is certainly not a practice one would want to see on a large scale.

Waste Is A Terrible Thing To Waste

Why bring this up?  Because there is a superior use for manures and other organic waste streams.  When waste is processed in an anaerobic digester,  most of the carbon in the is intentionally converted to methane, and then the methane is burned as a form of renewable energy.  The emissions are carbon neutral and the energy generated offsets fossil carbon use.  As with compost, the remaining fiber that is left after digestion can still be used for soil improvement or other uses.

Anaerobic digesters require a substantial, initial capital investment and are non-trivial to operate, but they are clearly the best way to deal with most organic waste streams.  They also pay for themselves over time.  Modern municipal water treatment facilities tend to have these digesters as do some large-scale dairies and CAFOs (confined animal feed operations).

The largest onion processor in California (Gills Onions) installed a digester for its substantial stream of trimmings.  Gills eliminated a troublesome odor and disposal issue, they now offset much of their energy demand, and they are ahead financially after paying back the initial investment. This is a great example of how "doing the right thing" from a greenhouse gas perspective can also be a sound, bottom-line option.

References on GHG emissions during composting: