Eight Technologies Keeping A Carcinogen Out of Your Food

Sometimes we need to hear about things that are working well in our food system.  I'd like to describe a case where sound regulation and well-applied technology combine to protect us from a significant risk posed by a natural chemical called Aflatoxin - one of the most toxic and carcinogenic chemicals known.  Aflatoxin can contaminate a wide range of foods from maize (field corn), to peanuts, to cotton seed meal, to tree nuts (almond, walnut, pecan, pistachio), to wild collected nuts (Brazil nut), to dried peppers to various spices. It can even be in chocolate! For those that live in "The Global South" (or developing world), aflatoxin is one of the leading causes of illness and death - particularly through liver cancer.  If you live in the richer parts of the world, you may never hear about this toxin. Strict regulations, combined with a suite of technologies and testing protocols, do a very good job of protecting us from this threat.  I'd like to describe them, but first I need to talk about...

The Bad Guys In This Story

This threat of contamination involves a "conspiracy" between a fungus, an insect, and the climate.  Ok, its just biology, but it is still insidious.  Insects, particularly caterpillars, damage crops by feeding on them.  Certain species and strains in the fungus, Aspergillus, are able to infect parts of plants that are damaged by the worms.  The fungus produces the toxin as a means of excluding other microbes from that damaged site.  For many crops (particularly maize,) drought or heat stress increases the susceptibility of the plant to this sort of attack.

A number of companies have developed various analytical tools to fit various parts of the system.  Rapid, cost-effective, and robust tests are available that can be used by non-experts to exclude contaminated loads before they enter the supply at somewhere like a grain elevator.  Very sensitive and precise tests are available to check the end product to meet even the high EU standard for nuts of 2 parts per billion aflatoxin.  The Gates foundation is funding development of very low cost tests to extend this life saving capability to the developing world.

There is an important "low tech" component to managing this threat.  In nut orchards, the Navel Orange Worm overwinters in "mummies"- the damaged and colonized fruiting structures which tend to stay attached to the tree, unlike the healthy nuts which are shaken loose during harvest.

It is very important for the growers to remove as many of the mummies as possible from the trees and to destroy as many as possible of those that fall to the ground.  Workers walk through the orchard with long bamboo poles to knock down as many mummies as they can.  In a recent study in Pistachios, it was determined that a threshold of 0.2 mummies/acre was desirable to keep worm populations low enough.  That would mean that between 99.965% to 99.977% of the nuts and mummies need to be removed by either harvest operations or subsequent sanitation.

Technologies 3 and 4: Insecticides and Mating Disruption

For the nut crops, the best strategy (in addition to doing the orchard sanitation) is to use two, well-timed insecticide sprays along with mating disruption - essentially putting out lots of sources of the Navel Orange Worm's mating hormone so that the males get completely confused and unable to find the females. 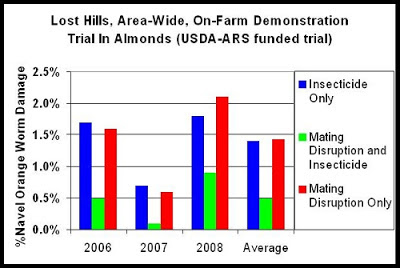 In a large scale, three year study (see graph above I made from their published data), the combination of insecticides and mating disruption provided the best control of the worms and thus greatly reduced the introduction of the fungus.

Marker assisted selection is essentially conventional plant breeding except that the breeder knows which specific genes are being moved around.  This is a side benefit of decades of investment in better and better laboratory tools for biotechnology (used in plant and medical technology). As an example, it has been used by Syngenta to develop more drought tolerant corn, and that will potentially lower aflatoxin levels.

There is also a GMO drought tolerant corn from Monsanto that will first enter the market in 2013, and this should also help reduce aflatoxin.  The more dramatic effects are seen with insect resistant corn lines (available from several companies).  If the worms (European Corn Borers in this case), can't feed long enough to damage the ears of corn, then the Aspergillus can't follow and produce the toxin.  This was observed quite clearly last year. 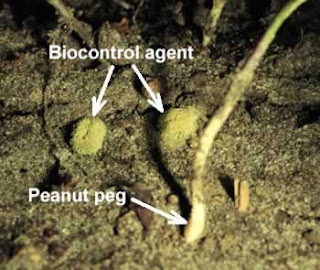 One very cool strategy developed by USDA scientists is finding strains of Aspergillus which compete well at colonizing insect damaged plant tissues, but which don't make the toxin.  These are called "atoxigenic strains", and they are introduced into the field as pellets that sporulate and allow these benign strains to find their way to the plants.  Syngenta, is now offering this product as Aflaguard.  The combination of the biocontrol agent and biotech-based insect resistance proved to be a particularly effective combination for maize in the 2012 drought.

With crops like tree nuts or peanuts, there is one more step that can be taken to deal with infections that slip through the other control measures (remember there is an almost zero tolerance for this issue). Shelled nuts are carried, one-by-one, at high speed, down a conveyer belt past a source of light that has a wavelength that will produce fluorescence at another specific wavelength if Aspergillus is present on a nut.  If that signal is picked up with detectors, a perfectly timed puff of air knocks that nut off the line.  This is why I always prefer to buy shelled nuts because they typically go through this process.  This procedure is also commonly used for peanuts going into peanut butter and other confectionary uses.

A great deal of effort goes into minimizing risks associated with aflatoxin in our food supply.  Extending these sorts of protections to the developing world is not easy, but is a much needed change.