Counting the Cost of the Anti-GMO Movement 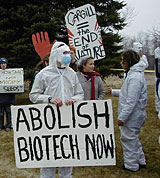 Last week, environmentalist Mark Lynas presented an articulate and painfully honest apology for his significant role in starting the anti-GMO movement in the 1990s.  He said that it was the most successful campaign in which he has ever been involved, but after finally looking into the science, he now deeply regrets what he and others accomplished.  While it is gratifying to have a figure like Lynas make such a turn-about, it does nothing to mitigate the damage of which this anti-science movement has perpetrated on humanity and the environment.  Ideally, such a dramatic reversal will induce others in the movement to rethink their positions. but this sort of openness to letting the science speak into bias is likely to be rare.

Lynas is right that anti-GMO campaigners have been extremely successful at blocking, delaying, or destroying potential crop improvements via biotechnology.  Lynas had a lot of ground to cover in his speech, so he only gave four examples of the ways that his previous movement has achieved its ends:

Beyond what Lynas described, there are other mechanisms by which the anti-GMO movement has frustrated biotech crop progress.  The threat of controversy generated by anti-GMO campaigners leads to various forms of brand protectionism which can become a non-regulatory barrier to technology adoption:

What Mark Lynas realized is that it is just as detrimental to the future of humanity to ignore the scientific consensus on crop biotechnology as it is to ignore the scientific consensus on climate change.  The fact that there are groups successfully blocking rational action on both these fronts presents a synergistically dire threat to efforts to feed humanity.

In an ironic twist, today on the way into a computer store I was approached by a young, Greenpeace worker.  She asked, "Are you familiar with Greenpeace?"  I said, "Yes, I'm a serious opponent."  She said, "That probably means you won't want to sign my petition!"  I concurred and encouraged her to listen to the Mark Lynas speech which I described because she had not heard about it.  I hope she does because her sincere energy to do something good is being twisted into something seriously bad.