Where Are Global Food Prices Headed? 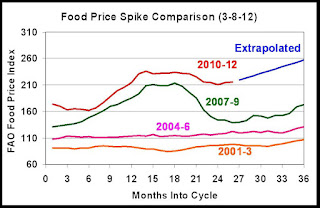 As I have continued to track the second "spike" in the FAO Global Food Price Index, I've become convinced that we have to look at it in terms of long-term trends, not the monthly ups and downs that are so often the focus of discussion.  Putting the data in 3-year windows is helpful, and as it appeared last month, the current "spike" looks like it is returning to an upward trend after only a very modest decline at the end of 2011.  In the graph above, the data available through February of 2012 (released today, 3/8/12) is shown in red.  If the the index follows the average 4.18 point/month gain seen over the same period in 2009, then the index could conceivably break 260 by year's end.

In my field of Plant Pathology, we use a tool called "the area under the disease progress curve" as a way compare plant disease epidemics.  I think the same approach could be useful to compare food price trends because the impact, particularly on poor and import dependent countries, is something that is felt over time. The graph below is based on the sum of monthly FAO Index values for the designated 3-year windows.  Using the same extrapolation as for the blue line above I've made an estimate of what this latest "spike" could mean in comparison to other historical periods. 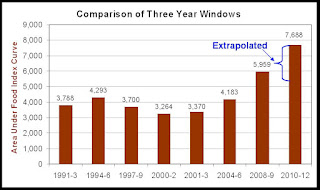 Hopefully it won't be that bad, but the point is that to compare these spikes, it is important to do more than to simply look at maxima and minima.

It is important not to over-interpret this one particular measure of the global food system, but I do think that it suggests that we are in a new chapter of food supply history in terms of the system to be able to respond to high prices through production gains.  I'm sure it is complex, but one small example is the fact that supplies of elite corn hybrids for the 2012 planting season in the US will be less than ideal because of weather-related problems with seed production.  That is not normal.


The next update is scheduled for April 5th.
You are welcome to comment here or to email me at savage.sd@gmail.com.  I would also be happy to share these graphs in PowerPoint form to anyone interested.
Posted by Steve Savage at 11:35 AM