Misuse of A Vietnam Era Tragedy 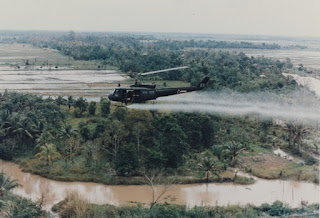 (Originally posted on Biofortified, 3/9/12)
Mark Twain once said, "A lie can travel half way around the world while the truth is putting on its shoes."  There was a perfect example of that last week.  The Center for Food Safety (CFFS) spread the term, "Agent Orange Corn" for Dow AgroSciences' new biotech corn hybrids that are working their way through the regulatory process.   These hybrids have been modified to be more resistant to 2,4-D, an herbicide that was introduced in 1948.  This is being cast as a return to the use of Agent Orange and that is completely untrue.  There is a lot of interesting detail behind this, but the CFFS moniker for the corn is a classic case of information twisting - twisting in a way that is intentionally misleading.  The reason that the term "Agent Orange Corn" is inaccurate can be discovered in a 1-minute Wikipedia search, but this did not prevent a host of of bloggers,environmental and Organic organizations, and even "news outlets" from uncritically passing along the disinformation.


The Link Between This New Corn Trait and Agent Orange

Agent Orange, a defoliant used in the Vietnam War, was made with two herbicides:  2,4-D (the one that the new corn tolerates), and 2,4,5-T.  The 2,4,5-T was unknowingly contaminated with a dioxin, something that was only later recognized as a significant human safety issue.  Yes, 2,4-D was part of Agent Orange, but it wasn't what made Agent Orange a danger back in the 1960s.  In fact, for decades, 2,4-D has continued to be one of the most widely used, safest herbicides in the world.  It is registered in 70 countries, including those with very comprehensive and cautious regulators (Canada, the UK, Germany, France, Japan...). 2, 4 D is a component of most consumer products for the control of weeds in lawns.  It is used extensively in wheat.  It can already be used on corn up to a certain growth stage.  2,4-D is NOT Agent Orange.

There was a very limited understanding of environmental  toxicology in America in the early 1960s.  The modern environmental movement was just beginning, and the Environmental Protection Agency (EPA) was not established until 1968.  So during the early 1960s,  terrible mistakes were made with Agent Orange that are completely unthinkable today.  Since that time the scrutiny of new and old pesticides has become comprehensive.  It would be virtually impossible for an Agent Orange-like mistake could occur today, but that is what CFFS and its repeaters are implying.

A great many of the pesticides that were in use in the early 1960s have long since been banned or progressively replaced with far, far safer alternatives.  A few, like 2,4-D, have continued to pass safety standards as they have been intensively reviewed and re-reviewed over the decades of increasingly sophisticated analysis.  2,4-D has been scrutinized and challenged from both a toxicological and epidemiological perspective.  In every round of risk assessment, the EPA and its outside experts have concluded that 2,4-D has meets the EPA's, ever more cautious, standards.


Why Would Farmer's Want This New Corn?

Farmers in the US and elsewhere have been moving increasingly towards the control of weeds with herbicides rather than with mechanical methods called "tillage."  This is actually an extremely good thing from an environmental point of view.  An image like that by Leo Breslau below looks romantic, but it actually represents an environmental disaster.

Plowed and tilled soils are susceptible to erosion.  Erosion carries not just sediments, but also fertilizers and pesticide residues into streams.  The mechanical disturbance of soil degrades its properties over time so that it becomes less able to capture and store rain and less able to sequester nutrients.  This sort of farming "worked" in many cases only because there was more "virgin land" to start plowing.  Beginning in 1960, some farmers began to experiment with "no-till" farming methods on a commercial scale.  One of the reasons they were able to do that was because herbicides like 2,4-D had become available.  Since the development of herbicide tolerant crops in 1996, the rate of conversion to no-till farming has been accelerating. From an environmental point of view, expansion of no-till farming  is highly desirable, especially if  combined with some other key practices. For farmers to successfully implement no-till farming; however, there must be a range of effective herbicide options.

When any one herbicide is used too much, some weeds can become resistant.  As many experts predicted, this has begun to happen for glyphosate tolerance (Roundup Ready).  The selection for herbicide tolerant weeds is not something new with biotech crops.  It is a problem that has occurred many times, long before GMO crops.  They key is to employ multiple options including herbicides with different "modes of action," cultural methods like cover crops or planting date shifts, and in some cases the judicious use of tillage.   Recently, some weed scientists have highlighted the need for more sophisticated and varied weed control strategies.   The new corn and soybean types that are coming can be a part of that strategy if employed strategically.  The alternative of returning to mainly mechanical weed control is not an acceptable scenario.
Groups like the Center For Food Safety have generated furor by shouting an intentionally sensational half-truth.  Ironically, this has put them in the position of advocating against a tool farmers need for environmentally sustainable farming.  This new corn, and the soybeans that will follow, are part of what will enable land-use efficient, low environmental footprint farming. They have nothing to do with a 50 year old defoliant. There is absolutely no doubt that the lessons from "Agent Orange" must be remembered.  The innocent victims of Agent Orange deserve that heightened awareness.  What they don't deserve is to have their tragedy exploited in an irresponsible way.
The "Comment Period" at the USDA about this particular corn technology has been extended until April 27th.  The CFFS and its allies are mobilizing people to enter comments.  There is a need for counter-balancing arguments from those that understand the importance of technology in agriculture.  Here is where to comment (USDA BRS Comments) before the extended deadline of 4/27/12.

You are welcome to comment here and/or to email me at savage.sd@gmail.com
Vietnam spraying image from Wikipedia
Leo Breslau "Plowing" image from the Smithsonian
Posted by Steve Savage at 2:01 PM