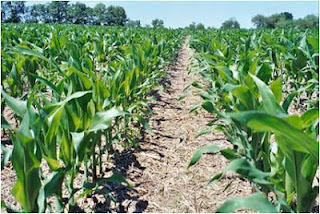 I've spent more than 30 years working in the agricultural technology sector.  I've written scores of blog posts defending it over the last three years.  That said, I don’t believe that "technologies" as such are going to feed the world.  Only farmers can possibly feed us as we face the epic challenge of doing so over the next few decades.  If farmers have great technology options, that can help both their productivity and environmental footprint; however, the burden falls on the farmers to integrate those technology options into a set of extremely complex and high-risk set management decisions.  Technology is just one component of their responsibility.
One often reads or hears assertions that "X" can or can’t "feed the world" (Organic, Conventional, GMO, Local...)   I think that all these statements miss an important point.  Anyone who farms on a commercial scale has to make scores of critical decisions each growing season.  There is no one suite of technologies or farming philosophies/rules that determine whether that farmer will be successful from either a food production point of view or an economic viability point of view.  A successful farmer will have integrated many interlinked choices about technology, practices, and timing.  These will have been based on monitoring of economic, climatic, and pest status.  They will involve numerous "bets" about the unpredictable course of those and other factors.  Farming is no business for the faint of heart.
Put Yourself In A Farmer’s Shoes
Think about the risks that an annual crop farmer takes.  They spend a good deal of money on their crops many months before it will be harvested and in many cases even longer before it will be sold.  They choose the seed variety to plant (many options in terms of traits, GMO and otherwise, suitability for their farm in terms of a host of adaptability).  They choose how to fertilize that crop, how to irrigate it if they have that option, how to manage its pest issues from before planting to in-season.  They have already had to decide whether to plant a winter cover crop.  They have had to decide about what sort of tillage system to use in and between crops (no-till, strip-till, conventional...).  They have to choose and maintain increasingly sophisticated equipment and they have the option to employ a whole range of “precision farming tools” and detailed databases about their farm.
All of this has to be done with only a limited ability to predict weather patterns and extreme events that can have a huge effect on the crop.  Farming is a high risk venture.  We all depend on farmers being willing to take those risks.
The Consumer Side
In America, and the West as a whole, we have been taught that “the customer is always right,” and that we are supposed to have any choice that we desire.  When it comes to food production, we can choose what we buy, but we don’t have a legitimate right to tell farmer what they can and can’t do based on our own urban sensitivities.  Farming is already a heavily-, and mostly well-regulated business.  If the USDA, EPA and FDA approve of a technology option, and if farmers find that it makes their job easier, less risky, or more profitable - who are we to begrudge them that opportunity?
Consider, for instance, the disparity between farmers and the broader population on the question of GMO crops.  Most farmers have been enthusiastic adopters of biotech crops where ever they are available in both the developed and developing world.  Many consumers remain wary of, and poorly informed about, the technology even after 16 years and billions of acres of cultivation without actual issues.
If people choose to reject science and regulators, it is certainly their option, but only for their own consumption.   A commenter on one of my posts recently said that he "should have a voice in how we produce our food."  Considering that the "we" was gratuitous, I said that while he should have a choice in what he buys, that cannot extend to the right to deny a farmer choices that fall within well-regulated norms.  We don't want to imitate the Europeans who have let politics trump their own scientific assessments.  There was a good recent post from a frustrated Portuguese farmer about this.
The vast majority of us depend on farmers, not just for survival, but also for the considerable pleasure and health benefits that are available at a remarkably affordable cost in modern society.  We would do well to appreciate the complex, risk-laden enterprise of the farming community, as well as their lack of leverage in the food system.  We should have more respect for their opinions.
You are welcome to comment here and/or email me at savage.sd@gmail.com