Gorillas And The Future of Crop Biotechnology 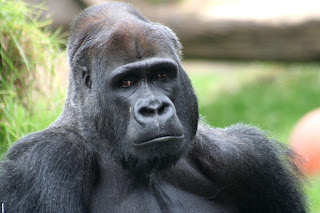 There are some really cool improvements coming along in several crops that have been developed using the tools of biotechnology - GMOs if you will.  Some of these innovations have consumer health benefits. Some expand ways to encourage greater produce consumption.  Some reduce food waste. Some prevent crop losses through disease and reduce the need for copper sprays.  These traits represent an expansion of biotech beyond the major row crops primarily grown for animal feed or for fiber to crops like apples, oranges, tomatoes, pineapples and potatoes.  Whether these new options actually make it to consumers depends a great deal on decisions that will be made by gorillas.  I don't mean the kind of gorillas that Jane Goodall studied.  I mean the kind in the expression "eight hundred pound gorilla."

The Eight Hundred Pound Gorillas of the Food Industry


In many industries, there are players with disproportionate economic leverage who are often referred to as the eight hundred pound gorillas for their sector. In the food/beverage industry, there are huge entities from importers (e.g. Dole, Chiquita), to manufacturers (e.g. Mars or Frito-Lay), to food service retailers (e.g. MacDonalds or Starbucks), to grocery retailers (e.g. Safeway, Wal-Mart...) who have an out-sized influence on not only their market segment, but on their supply chain. In the early years of crop genetic engineering, entities like these used their influence to to slow or stop the commercialization of biotech crops. The question is what role these gorillas will play for the next generation of potential crop improvements.

When the Gorillas Embraced Biotech


When genetically engineered crops were first being commercialized in the mid-1990s, several of the gorillas were supportive. Frito-lay was funding its own potato genetic engineering effort focused on storage life and chip quality. Dole and Chiquita were both in discussions with biotech companies about potential solutions to their biggest disease challenge ( Black Sigatoka disease) and about the potential to make a banana with longer counter-life at optimal ripeness. Forward-thinking folks at Starbucks were  looking into whether they might need to get involved in helping their small coffee bean producers through horticultural research and extension. Genetic engineering was one of the topics on the table.  Meanwhile, farmers in the 1990s who grew crops with biotech options were very happy with what these options offered them (soybeans, corn, sweet corn, cotton, canola, squash, potatoes, papayas).

When Gorillas Are Weak


However, by the later 1990s and early 2000s, the efforts of anti-GMO groups to demonize the technology were beginning to take effect. They used dramatically misleading imagery (great big hypodermic needles full of mysterious colored liquids, fruit and vegetables with faces...) and anti-corporate conspiracy theory rhetoric to alarm consumers.  For all their protestation, there was no change in the scientific assessment of the intrinsic safety of the technology, nor were there real cases of health or environmental problems.  However, the manipulated trend in consumer thinking began to worry the gorillas. The large players in the food system have tremendous power and influence, but they also have great vulnerability to anything that could tarnish their consumer brand.  Activists of all stripes have taken advantage of this for many causes, and the anti-GMO forces began to do the same.  Most of the continuing GMO crops are sold into non-branded animal feed and food manufacturing ingredient channels, so they were little effected by brand protectionism.  For crops that do flow to consumer-branded companies, the story was different.


Round One Didn't Go So Well

Starbucks was one of the first companies to come out with a pledge not to use GM (even though there were no GMO options for coffee anywhere close to the market).  Unfortunately they also dropped the whole supply line horticultural support idea as well. The big banana companies backed away from any GMO projects.  The major candy companies used their influence to delay for many years the introduction of herbicide tolerant sugar-beets.  Even though the corn hybrids grown for the chip market were not generally GMO, the marketing side of Frito-lay reactively pledged that they would not use GMO corn for their chips.  The company then quietly dismantled their GMO potato effort.  At one point, MacDonalds made three phone calls to their major frozen fry suppliers asking if they could get only non-GMO potatoes. That effectively ended the growing of biotech potatoes - an improvement which required far less insecticide use.  In the conspiratorial narrative of the anti-GMO movement, Monsanto is portrayed as being so powerful that it is able to "control the food supply."  In reality, neither Monsanto or the entire potato growing and processing industry could do anything once the 800 pound gorilla of spuds decided it didn't want to risk brand-tainting protests.  The gorillas were subdued by the activists in the first round of biotech innovation.

What About Round Two?

So, its been at least 10 years since that first round of gorilla influence.  Why should anything be different with this next round of technology offerings?  It is not as if the anti-GMO movement has become any less intent on its mission or any more honest about the science.  Brand sensitive companies are still basically risk-averse.  The general public is probably no better informed about the actual science or about the ever stronger scientific consensus supporting the safety and utility of these technologies. Some factors remain the same, but not everything.


News Sourcing:  people don't get their "news" the way they did in the 90s.  Most have chosen the sources that fit their world-view, so something like an anti-GMO protest is going to be covered, or not covered differently for segments of the public.  Indeed for those who get their information from websites like Grist or Mother Jones, there is some sort of anti-food industry or anti-GMO diatribe almost every day.  It is hard to imagine how some new development will stand out against that background.  For the rest of society that hasn't drifted into full-blown conspiracy theory thinking about biotechnology there may be some fatigue from the fear-mongering.  There must eventually be a statute-of-limitations for saying that the sky is falling.

Communication by Scientists:  overall, scientists have not communicated that well with the broader public, but that has been changing to some degree.  There are a number of websites that do a much better job than what was around in the late 90s.  Meanwhile, the collected body of independent, peer reviewed publications supporting the safety of biotech has grown.

Communication from the Farming Community:  the ag community has increasingly begun to use the internet and social media to tell its story.  They are understandably tired of being demonized and falsely represented by the "food movement." This response includes everything from farmer bloggers to farming organizations.

Real Food Supply Issues:  In the 90s it certainly seemed that food was in abundant supply - even in over-abundance.  Since then there have been some shocks to the global food trade balance that are hard to ignore and there is some reason to believe that we are in a new paradigm between population growth, expanding Asian middle classes, and climate change.  This has meant a bit of food budget stress for the rich world, but it has already had a major political role in events like the "Arab Spring."

Calling People Out About The Science:  A number of voices have pointed out the fact that neither the political Right or Left has been consistent in respecting the scientific consensus.  Those who embrace the consensus on climate change tend not to on biotechnology and visa versa. Mark Lynas, a past anti-GMO campaigner, articulates this extremely well as have some in the mainstream press and in  Books.

A California Surprise:  The voters of California soundly defeated a deeply flawed GMO labeling initiative in the 2012 election.  This was completely unexpected since the "just label it" message originally sounded logical to 90% of them.  The GMO labeling forces blamed this loss entirely on the level of spending by the food and biotech industry, but like Sheldon Adelson, they might need to acknowledge that votes are not simply for sale and that voters might actually have some independent, critical thinking abilities once they get the facts.

Can We Support Courage On the Part of the Gorillas?


Last year, Seminis Seeds (a Monsanto subsidiary) commercialized some new insect resistant sweet corn hybrids.  Even though Syngenta's Bt sweet corn had already been on the market for many years, the major grocery retailers and processors had quietly suppressed its use and it was mainly grown for the roadside market. Thus few of the mostly local sweet corn growers ever got to take advantage of that technology which could have saved them many insecticide sprays each season. The anti-GMO crowd tried to make a big issue of the new hybrids and threatened to sponsor a boycott of Wal-Mart if they carried the product.  Wal-Mart (an eight hundred pound gorilla if there ever was one) was bold enough to say that they saw no reason not to carry Bt sweet corn. Whether they actually did isn't clear.  Still, the controversy faded.

Perhaps scientists, farmers and reasonable people in general can encourage the gorillas to take a different stand this time.  For instance, I'd like to be first in line to buy "Arctic Apple"  from some brave retailer and then pass them out to friends and family. With social networking organizing something like that with lots of supporters is certainly possible.  Maybe things could start small with deliveries to a few distribution points in people's garages.  How about coming together to enjoy some fries from whatever restaurant is first willing to talk about using a healthier oil to cook low acrylamide potatoes?  How about writing campaigns to encourage gorilla companies to stand up to the purveyors of fear.


Gorilla image from Brocken Inaglory.  A good article on this topic in Delta Farm Press from 2003