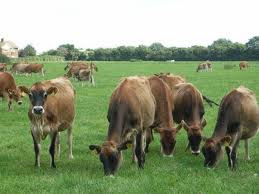 Fertilizer that comes from cows or other animals does not really originate with them.  Manure from cows and other animals has been used as a crop fertilizer for millennia, and it is still used today for about 5% of US crop acres and for a high proportion of organic acres.  It is often spoken of as an alternative to "outside inputs" for crops and as a superior option relative to "synthetic fertilizers."  However, just as Obama said about businesses and infrastructure, "you didn't build that," when it comes to fertilizers from animal sources we must also say, "they didn't make that."

Don't get me wrong, I think that cows are wonderful.  It is only because their complex, ruminant digestive system houses certain bacteria that we humans have access to the most abundant form of plant-stored solar energy - cellulose.  Animals also do a rather good job of absorbing the mineral nutrients like nitrogen, potassium and phosphorus in their feed, but they are not 100% efficient at utilizing their dietary input.  So, their manure still contains nutrients which can fertilize a crop.  But the animals didn't "make" any of those nutrients.  For instance the ~2% nitrogen in cow manure came from whatever they ate (grass, corn, soybeans...) and those crops, except for the soybeans, were mostly fertilized with "synthetic nitrogen." The cow is just passing a bit of that along.

Organic farmers are limited to non-synthetic sources of nitrogen fertilizer.  They can supply some of that through biologically fixed nitrogen produced by legumes as main crops, cover crops or green manure crops.  Still, the reality is that many organic crops (fruit, vegetables, corn, wheat...) are fertilized with animal manures or composts thereof.  Organic growers are allowed to use manures/composts that come from conventional animal sources.  This is necessary because otherwise, organic farmers would be severely nitrogen limited.  Organic agriculture is actually quite dependent on manure from animals fed with non-organic crops.


Manure is also a non-ideal fertilizer in many ways.  Cows and other animals are better at getting the nitrogen out of their feed than the phosphorus, so manures generally have too much phosphorus if they are applied at rates sufficient to supply a crop the nitrogen it needs.  That phosphorus can then become a ground or surface water pollution issue. The best way to utilize manures is to supplement the nitrogen with synthetic sources to better balance with the phosphorus.

Manure is also a source of bacteria that are human pathogens.  That is why it needs to be composted to be safer for use on human food crops.  But there are enough methane emissions during composting to be highly problematic from a greenhouse gas point of view.  When manures are incorporated into farmed soils they can also lead to more greenhouse gas emissions as methane.

Also, much of the nitrogen in manure is not in a form that the plant can use until it is "mineralized" into the ammonium or nitrate ions that plants can absorb (also what is in "synthetic" nitrogen fertilizers).  Mineralization is dependent on the activity of soil microbes and they don't necessarily release the nitrogen at the time of the growing season that the plant needs it the most.  In a recent meta-study of research on organic vs conventional crop yields, the authors observe that to come closer to conventional yields, it was necessary for the organic program to use more total nitrogen so that during the period of peak demand it was not as limiting (sorry, it is behind a pay wall, but the authors were willing to share a full copy when I wrote them).   Of course, in such cases the extra nitrogen would also be mineralized at times when the crop was not demanding it, leading to more surface or ground water pollution or to greenhouse gas emissions (nitrous oxide).


So, cows (or sheep or pigs or chickens) are not actual net contributors to our demand for fertilizers.  They just temporarily retain a bit of the supply generated for their feed.  We need sources of nitrogen to enable crops to harvest solar energy and turn it into a form that we can use.  We need the nitrogen to make the proteins that we need for growth and brain development.  We need to make good use of the nutrients that are left in animal manures, but they are only ever going to be a small contributor to our overall fertilizer needs.

You are welcome to comment here and/or to email me at applied.mythology@gmail.com