A Defense of Plant and Crop Related Patents 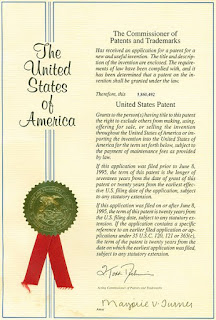 Patents involving plants are often portrayed as a seriously negative phenomenon.  In fact, they play an important and beneficial role in the development of better and more productive crops.  As I have watched the controversy around the role of patents, particularly as related to biotech crops, it seems that critics have little understanding of why the patent system was created in the first place, how the patent system actually works, and what patents do and don't mean in the commercial realm.

I would like to explain why, rather than being some sort of sinister tool of conspiratorial control, patents on plant varieties and on biotechnology innovations are key drivers of the investment and creativity that we will need if we are to meet the food supply and environmental challenges that lie before us over the next few decades.

Patent systems were set up to provide creative people with the incentive to invest their time, money and talent in the development of inventions that could benefit society.  To do that, the following bargain was struck:  the inventor gets a specifically limited period with the exclusive right to derive economic returns from the sales/use of the invention only if they meet two standards.  First, they must make a sufficiently strong case that their invention demonstrates "novelty," and second, they must fulfill "the obligation to teach."  I'll unpack that below.

To receive a patent, an invention has to "exhibit novelty" meaning that it is different from similar inventions ("in the prior art"), and that novelty has to be something that is "non-obvious to one skilled in the art."  Anyone who has ever pursued a patent knows, it is quite hard to meet that standards.  Even after a patent is awarded, the novelty question can - and frequently is - disputed in court if the patent turns out to have any significant economic ramifications.  As I heard in my first company-sponsored training on the subject, "a patent is only a license to be sued."  The effort and originality involved in patenting of plant lines and of genes is often spoken of as if it is some trivial, and thus undeserving activity.  That is only believable if you've never engaged in the process.

The Obligation to Teach


When someone develops something new and hopes to profit from having done so, the main alternative to patents is what is called a "trade secret." If you pursue a trade secret strategy, you hope that the details of your product or process are sufficiently obscure that others can't imitate it.   To get the more certain period of exclusivity offered by a patent comes with a requirement that you explain your invention in detail sufficient to allow any qualified reader the ability to understand exactly what it is and how it works.  This "teaching requirement" is actually the genius of the patent system. To get temporary exclusivity, you have to reveal information that will very often give competitors ideas about how to do something even better or otherwise "work around" your patent.  Also, often years before a patent can get through the process to be awarded, it is"published" so that what you teach is available to everyone else sooner than you get the patent or even if you never get it. The system forces a level of idea-sharing that would never have happened without it.

In my paying job as a technology consultant (as opposed to time I spend blogging), I frequently help companies monitor what their competitors and the academic community are doing in a specific area of science.  I find that recently published patents are an extremely useful window on such a question (try this yourself on the search page for the patent office.  type something like ttl/rose to see how many patent applications have been filed just for roses).  Mind you this is not a collegial exchange of information.  Between the dull, precise nature of scientific language and the obtuse nature of lawyer-speak, patent applications must be in competition for the most tedious form of writing (I know because I have to read these).  Still, it is a form of real idea exchange that is forced by the patent system.  The grand bargain works for the benefit of society.

Who Patents Plants and Plant-related Technologies?


The modern anti-biotechnology narrative would have you believe that certain companies (Monsanto usually being portrayed as the ultimate demon) are using patents in some new paradigm to "control the food supply." This view ignores the fact that plant variety patents have been a common feature of crop genetics since 1970 and that a great many of those patents are held by universities, by the USDA, and by similar international agencies (Patents for vegetatively propagated plants have been an option since 1930).  Actually, the most foundational tools of biotechnology for plant, pharmaceutical or industrial use were patented by scientists at Stanford University.  For a time, any group that did genetic engineering needed a license to the Stanford-held, Cohen-Boyer patents that are now considered a "gold standard" for university licensing.

When, in the 1990s, commercial biotechnology entered the agricultural seed market space, the fact that such products were patented was nothing new.  For decades, commercial, academic and government researchers have typically patented their inventions.  None of this is sinister.  If someone develops a crop variety that has real economic value to farmers, it does not matter whether the innovation originated in the public or private sphere, it may well be patented.  For any entity to take the following steps to commercialize that trait, the temporary exclusivity afforded by a patent makes it worth their effort and investment to do so.

How Much "Control" Does A Patent Provide?


A patent on something like a gene for potential use in a biotech crop means very little by itself.  There are typically many patents covering parts of or steps in the process of bringing that trait gene to the market - often patents controlled by different entities.  For instance, as soon as genetic engineering became a possibility in the 1970s, many groups were interested in finding a way to make plants resistant to the very broad spectrum, low toxicity herbicide - glyphosate.  It turned out to be difficult to get a form of the effected enzyme, EPSPS that would not be inhibited by glyphosate but which would still serve its normal function for the plant.  It ended up requiring two distinct changes at different positions in the enzyme.  The group that finally generated a modified gene that did the trick (designated as "CP4") worked for a small start-up biotech company in Davis, California called Calgene.  The investors and scientists there were rewarded for that breakthrough when Monsanto commercialized the trait.  Still, that was only the beginning.  For this enzyme to function properly it has to move into the chloroplasts in the cell.  That means it has to be linked to a Chloroplast Transit Peptide and the patent for that was awarded to a European biotech company (there were several major European players in the early days of this science).  Monsanto had to pay a royalty to that company for rights to use the patented sequence.

There are patents covering the steps required to actually get a new gene into a plant.  For some time, the preferred method of doing that has been with the help of an organism called Agrobacterium.  For many years, any company that wanted to use a special strain of that bacterium which would do that job with monocot crops (e.g. corn, wheat, rice...) needed to pay for rights to use a strain that was discovered by scientists at a Japanese company called JTI.

Once a gene is successfully inserted in a particular specimen of a crop in such a way that it is expressed functionally and does not cause any other problems, such an "event" is patented.  This still means little in the commercial realm.  Next the trait has to be "introgressed into elite germplasm," meaning it has to be crossed using conventional breeding methods to get that trait into many of the best hybrids or varieties which seed companies have developed for specific geographies and/or specific uses.  This part of the seed industry is very competitive for the crops which have been engineered to-date.  A company that has developed a new trait has the option of only commercializing in their own seed lines or of licensing it broadly even to their competitors.  Monsanto picked the later path with their Roundup Ready Soybeans, and even though farmers rapidly adopted the technology and used it in over 90% of what they planted, those seeds were purchased from many different seed company competitors whose elite germplasm was every bit as important for the sale as that one trait.

Of course patents have a finite term.  For instance, the key patents covering the original Roundup Ready Soybeans will expire in 2014 and Monsanto will have no future control of those lines.

Patents also don't always block uses.  When Cornell University developed virus resistant papayas that could save the Hawaiian industry, Monsanto gave them rights to certain necessary patents for free.  Similarly, many companies have waived their patent rights for technologies involved in "Golden Rice."

Behind Each Patent, There Are People


Part of why I am so positive about the role of patents in agriculture is that over the years I've had privilege of meeting many of the individual scientists who have been involved in the inventive process of plant biotechnology - the sort of innovations that can be patented.  The people I have met/known have innovated in both small and large companies, in universities and in the USDA and if you met them you would be impressed with both their scientific acumen and their positive ambitions for making a societal contribution.

Cohen and Boyer taught sections of a biochemistry class I took at Stanford in the late 70s.  One of the inventors at Calgene that found the CP4 gene worked in the neighboring lab when I was a graduate student at UC Davis.  One of my previous employers had a partnership with JTI and I met scientists at their plant biotechnology center that came up with the monocot-specific Agrobacterium strain.  I have done projects in which I met several university scientists whose inventions were licensed by the companies that commercialize biotech and other crops.  I've met many of the scientists in the big ag/biotech companies and interacted at various stages of biotech crop development from ideas to full commercialization.  I wish you could meet these scientists.

From what I have seen, the potential of patent protection has been an extremely important driver of creativity and of getting the resources necessary for scientists to be creative.  In every case what I've seen involves scientific rigor, real-world problem solving, and excitement about being able to make a contribution.

I've seen universities get a stream of money to support additional research because of a patent they were able to license.  I've seen small companies reward their staff and investors because of important patents they generated.  I've seen the advanced level of scientific effort that is possible in large companies for whom the potential of patented products allows a high rate of plowing profits back into research - something that does not happen in the companies that sell generic products.

Based on all these experiences, I cannot share the concerns that are being so widely expressed about the role of patents in agriculture.  In fact, I cannot imagine a path forward without them.