Why You Probably Don't Know That Pesticides Have Changed

In my last post I gave an example of how much safer pesticides have become over time.  That would come as news to most people because they have a negative, out-dated and stereotyped image of pesticides.  I think there are three reasons for this:

1. Who Controls Crop Pests? Probably Not You 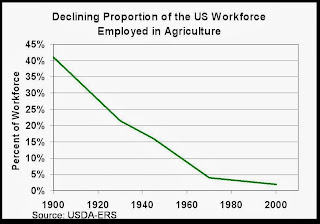 If you live in the rich world and are involved in crop production, you are part of a tiny minority of highly efficient producers. Because of this, there are very few people who have observed the changes in the nature of pesticides over time or who are familiar with the current portfolio of options.  I follow a number of farm press publications and blogs, and the discussion of pesticides there is completely different than in any mainstream source. Those who choose to play a role as commentators on agriculture should take the time to be well informed on modern pesticide use and safety.

2. The Convenient, "No Pesticides" Fiction

The production of organic crops definitely involves the use of pesticides. In many cases it requires more frequent applications and/or higher use-rates per acre than for conventional. The pesticides organic farmers are allowed to use come from a list deemed by committee as being "natural," but they are still pesticides and they are not necessarily safer for us or for the environment than options available to other farmers. Natural does not automatically mean safe, that is why natural options also have to go through EPA registration. There are quite a few pesticides that are widely used by both kinds of farmers.  These facts are not broadly understood. 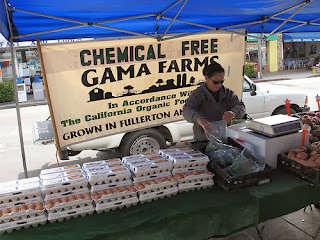 Most consumers have the impression that choosing organic means avoiding pesticides, and the broader organic marketing chain and advocacy wing is often happy to promote this misconception.  At a farmer's market one often sees signs saying, "no sprays," or "pesticide free," statements that are rarely true. Various promoters and marketers of organic often argue that consumers should choose organic "to avoid pesticide residues" even though choosing organic actually means you know less about what residues are likely to be present because none of our residue monitoring efforts look for some of the materials most commonly sprayed on organic crops (e.g. copper fungicides, biocontrol agents, Bt toxins...).

At a mainstream grocery store I recently saw a sign over the organic produce display saying "grown without chemical fertilizers or pesticides," as if there were some category of physical matter which isn't a chemical.  Even defenders GMO crops are often guilty of saying that a Bt crop "reduces the use of pesticides" when, in fact, it is simply a different means of delivering a pesticide - another very safe one, but still a pesticide. The consumer needs to know if there is any pesticide residue of concern on a given food. Year after year, an extensive USDA survey of pesticide residues on food in commercial channels  show levels that are too low to be of concern. Consumers have no reason to hesitate to consume the domestic or imported conventional food supply in the US. Unfortunately this analysis is routinely distorted by the Environmental Working Group to promote organic as a means of "avoiding pesticide residues."  Recent data from Canada shows that there are frequently pesticide residues on organic produce there.  Again, the question is whether the levels are high enough to matter.

3. The "Team Effort" You Never Hear About That Made Pesticides Safer

As a 37-year participant in various parts of the process of changing the nature of pesticides, I've seen an unlikely collection of entities, each of which should take some of the credit for the progress that has been made.  For each I'll briefly describe their contribution(s) and also speculate on why you probably don't know about it or appreciate it.
Consumers don't have to understand how much pesticides have changed or why in order to get the benefits that come with increased productivity and safety.  However, it wouldn't hurt them to know about this so that they could enjoy the food available to them.