When Increased Pesticide Use Is A Good Thing 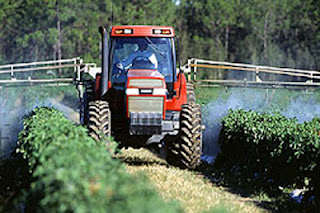 A recent study published in Environmental Sciences Europe has attracted attention because it documents a net increase in pesticide use on genetically engineered crops in the US.  The author, Chuck Benbrook, is certainly qualified to consider pesticide issues, and I have had positive interactions with him over the years; however as an organic advocate he has a very different perspective on pesticides than I do.  Chuck is certainly not alone in his assumption that pesticide use is,  by definition, something undesirable.  That is an assumption that deserves to be challenged.  There are some patterns of pesticide use that are problematic, but there are many more in which the pesticide serves a positive purpose that far outweighs any associated risks.

Throughout the history of biotechnology in agriculture, I have been uncomfortable with the way that many of its advocates claim that "reduced pesticide use" is one of the primary arguments for the use of the technology.  First of all, even the Bt crops which even Benbrook credits for reduced foliar sprays (Bt cotton and European Corn Borer resistant corn) were not actually about eliminating pesticide uses - they were about delivering a different kind of pesticide efficiently via the plant itself.  In fact in the Western Corn Belt, the introduction of Bt corn lead to yield increases because much of this new "pesticide use" via the seed was on acres which were normally untreated in the past.  The various caterpillar pests of corn and cotton are real challenges for crop production and they are not going to go away.  Pesticides, whether delivered via chemical applications or plant expression, are good and useful tools because they preserve yield and thus increase the efficiency of all the other inputs to the crop (land, water, fuel, fertilizer, labor...).

It is an unfortunate reality that most people don't know how to think about very large or very small numbers.  The gleeful interpreters of Benbrook's study from the Food Movement (e.g. Tom Laskawy at Grist) leap on evidence of an impressive sounding number of increased pounds of pesticides used on biotech crops. 404 million pounds sounds like something huge, but not when put into the perspective of the area involved.   This 404 million pound figure is Benbrook's overall estimated increase on the hundreds of millions of acres of biotech crops over the 15 year period between 1996 and 2011.  That works out to something like four ounces per crop acre per year. Even if it were four times that value, it would represent 0.00002 pounds per square foot.  Just for additional perspective, an organic vegetable crop might easily be treated with several copper fungicide applications at the rate of six pounds/acre each season.


To his credit, Chuck Benbrook points out that "in light of its generally favorable environmental and toxicological properties, especially compared to some of the herbicides displaced by glyphosate, the dramatic increase in glyphosate use has likely not markedly increased human health risk."  Benbrook knows what many people do not, which is that pesticides differ from one and other by orders of magnitude in terms of their various toxic properties to us and to non-target organisms.  Thus, any time that one hears about an increase or decrease in pesticide use, it is crucial to ask what chemistries are involved.  For instance, the biotech corn hybrids that have been introduced with resistance to Corn root worm (actually a beetle) have been a plant-delivered pesticide alternative that reduced the need for some older organophosphate chemicals which are more problematic than most modern insecticides.  For resistance management purposes and for secondary pests, there is actually the need for increased use some alternative soil insecticides or seed treatments.  Once again, the constant goal is to adequately control economically important pests, and over time to do so with lower and lower risk options.


Why Increased Herbicide Use Can Be A Very Good Thing


When it comes to herbicides, increased "pesticide use" can be a very good thing from an environmental perspective.  In the early eighteenth century, an English agronomist named Jethro Tull began promoting "horse hoe husbandry" which was essentially the innovation of planting crops in neat rows and using mechanical devices like plows and harrows to control the weeds growing in between.  It revolutionized agriculture, but also put farming on a track towards serious environmental impact.  Plowed soils are susceptible to erosion which leads to declining soil quality, sedimentation of waterways, and ultimately to movement of soil-associated fertilizer and pesticide residues into surface water.  In later, mechanized agriculture, plowing was also associated with significant fuel usage. Probably the single most important advance for sustainable farming has been the elimination of plowing and other soil disturbances which is achieved through methods such as "no-till farming."  The introduction of herbicides in the 1960s, farmers, equipment companies and chemical companies began to develop ways to grow crops without tillage (no-till).   Herbicide tolerant crops greatly enhanced farmer's ability to adopt these methods since the mid 1990s.  This is clearly a case where "more pesticides" means a better environmental outcome.  This is exactly what is going on as an result of the increase that Benbrook documents.  It is a good thing and a positive result of biotechnology.


The USDA pesticide use reporting, on which Benbrook relied for much of his analysis, ended during the Bush administration around 2006.  This is unfortunate because it failed to capture a substantial increase in pesticide use that has occurred in response to the unprecedented increase in agricultural commodity prices since 2007/8.  US row crop agriculture has always been a relatively low-use chemical market from an agricultural chemical perspective.  For the big US crops like corn and soybeans, there have historically been very few sprays of insecticides or fungicides.  US and Canadian wheat production involved even fewer.  In Europe, between high yield potential, crop subsidies, and wet weather, pesticide use is vastly higher on wheat and other crops than in the dominant US row crops.  However, in recent years as corn, soy and wheat prices have risen to levels several times higher than in the past, American farmers have been able to economically justify in-season sprays of fungicides and insecticides to prevent pest-related losses that would have simply been tolerated in the past.  The chemicals that they are using for these sprays are in the "not scary" category, and thus their usage is a good thing for the critical role that the US and Canada play in the global food supply.


To reiterate, pesticide use or its increase are not automatically undesirable things.  It depends on what is the alternative and what is the nature of the particular pesticide in question.  Plant biotechnology is just one important tool in the bigger tool box of agriculture.  Sometimes it allows farmers to use a more attractive pesticide option (Bt Sweet Corn would the be best example of this).  Sometimes it helps them with the adoption of sustainable practices that depend on relatively low risk herbicides.  For farmers, biotechnology and pesticides are not an either/or.  They are often partners.

Sprayer image from the USDA
You are welcome to comment here and/or to write me at savage.sd@gmail.com
Posted by Steve Savage at 9:41 PM