6 More Reasons To Vote No On California Prop 37 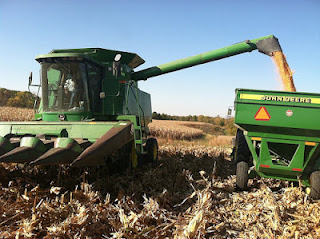 I’ve posted a blog about why GMO labeling is basically illogical.  If you take the time to read the actual proposition, there are at least six more reasons that proposition 37 on the California ballot this fall is a really bad idea that voters should reject.
1.    This is asking for something that is a great deal harder than it sounds.
Almost all GMO crops are commodity grains.  To understand what labeling these crop ingredients means means, think of a river.  When it rains, little rivulets of water begin to run off of the ground, and then combine into small creeks.  These combine to make streams that eventually combine to make a river. By the time the water is in the river, it is so mixed that you could never know which drop came from where. The commodity grain industry is much like that river.  Many fields are harvested using the same harvesters and grain wagons (see first image above). That grain then goes either to a grower's silo or to a local elevator, which combines the harvest from many farms and fields. 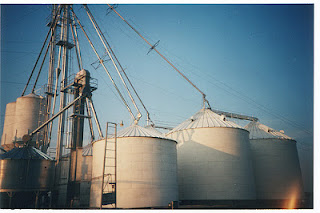 The grain is later moved in things like 110-car freight trains or giant barges or ships, which again mix various sources. Along that path, some of the grain is processed into ingredients for human food, while most of it goes to animal feed. 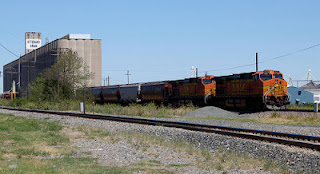 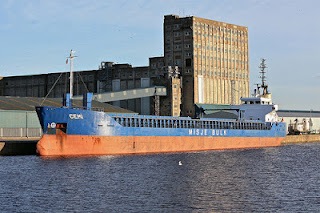 Along this complex, but highly efficient path, there is so much mixing (“co-mingling” in grain-speak) that a question like, “did this come from a GMO or non-GMO field,” is impossible to answer.  In all those steps, keeping GMO and non-GMO grain separate is inefficient (e.g. different harvesting equipment, partially filled trucks, dedicated bins, paperwork…).  That makes it costly.  It would also be very difficult to prevent a little bit of onetype of grain out of the other because a little can be left behind in a harvester, truck, bin, etc.  In theindustry that is known as “adventitious presence.”

The 0.5% threshold specified in the legal text of prop 37 would be highly problematic from a practical point of view. Considering that biotech traits are used in a very large percentages of the soybean, corn, canola and sugar beet crops, it makes much more sense to allow something that has been expensively segregated to be labeled “non-GMO,”as is already the case.
2.    This initiative would create a field day for lawyers.  If this initiative is passed, anyone who wants to can take acompany to court if they think they are selling unlabeled GMO foods.  They don’t need to go to any governmentagency with oversight  - just straight to court.  There don’t have to be any damages in question.  The courts are also allowed to award the accusing party compensation for courtcosts and for the costs of investigating the food in the first place.  Given the practical challenges described above, this initiative would create a thriving litigation industry for exactly the kind of lawyers who wrote this proposition in the first place.
3.    This initiative would effectively restrict the use of the marketing term, “natural.”
Any foods which are even minimally processed (e.g. milling of wheat to make flour) cannot be marketed as “natural” under this potential law unless they are either specifically tested for GMO status or come from a highly segregated channel complete with an audit trail and sworn affidavits.  That would even be true for foods made from crops that don’t even have commercial, biotech traits.  Thus, unless a food is certified Organic (specifically exempted in this initiative), it becomes expensive and legally risky to call it “Natural.”  Arguably, the marketing term “natural” is over-used, but the answer to that isn’t to create an uneven playing field through a proposition that is promoted for a completely different reason.
4.    It will be virtually impossible to fix any unintended consequences of this law.  This initiative is designed to be difficult to change.  It says that if any part is stricken in the courts all the remaining sections are in force.  Even worse, it requires that any changes require a 2/3 majority in both houses of the legislature –something that is highly unlikely based on the extreme polarization of California politics.  If we pass this initiative, we will likely be stuck with it no matter what expected, or unanticipated problems it creates.
5.    This is another example of the California initiative system being gamed by special interests from out of state.  It is common for special interests to use the Californiainitiative system by paying people to collect signatures and then buying advertisements.  This has nothing to do with the original concept of a grass-roots, citizen-driven process.   In this case the major fundingcame from the notorious food-fear merchant, “Dr.” Mercola, and also from some of the Organic food companies that employ distorted, negative descriptions of non-Organic food topromote their products.  It was also driven by activist lawyers who stand to gain financially.  The initiative is being promoted as a common sense requirement for consumer benefit.  Common sense should actually drive California voters to follow the money.

6.    It is worth asking, “why do farmers like these crops so much?” There is a bit ofa spoiled child flavor to statements like, “hey, I’m the consumer so I shouldget any information that I want.” We who actually depend on farmers for something as non-optional as foodshould at least ask, “why are GMO crops so overwhelmingly popular with any group of farmers with who has ever been given the opportunity to grow them?”  Farmers that manage to stay in business in that risk-laden enterprise do so by making rational economic decisions.  Biotech crops are something that has made good business sense for them, and by extension, a less costly and more reliable food supply for consumers.  If this initiative has the disruptive effect on the food system that its writers are hoping, we may discover the downsides of ignoring the interests of people on whom we depend.
If you are a scientist, you can add your name to a petition against proposition 37 that has been organized by university and foundation researchers.  Its not just industry scientists (like myself), who are opposed to prop 37.  Its people who understand the science and its benefits.


You are welcome to comment here or to email me at savage.sd@gmail.com

Credits:
Corn combine image from bohnsack
ship image from 62518797@NO4
Train image from RoyLuck
Silos image from spiesteleviv
Posted by Steve Savage at 9:53 AM