What We Have NOT Recently Learned About Pesticide Risk 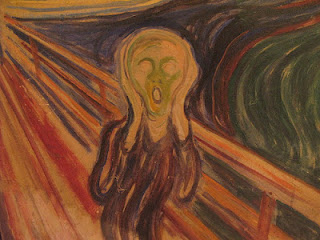 A few weeks ago, the readers of various "Food Movement" and "Health" blogs (and unfortunately some news sources) were treated to a major dose of fear mongering.  It had to do with an old agricultural fungicide that was tested at an extremely high, non-contextual dosage in a scientific study that looked at "chemical effects on epigenetic change."  What the study demonstrated was interesting, but it's interpretation in various circles has been completely out of context.  For example, self-described "Health Ranger," Mike Adams of Natural News started off with the headline:
"Red alert for humanity: Chemical damage can be inherited by offspring through unlimited generations"


Under the section heading, "Why chemicals threaten the future of the human species," Adams concludes:"  we are, in essence, ChemHumans, forever imprinted with the toxic burden of all the tens of thousands of synthetic chemicals we have foolishly unleashed onto our world, our environment and food supply".
What inspired this sort of "the sky is falling" rant?  A classic failure to put a scientific finding into any sort of rational perspective.
The Journal Article That Got This Started
On May 21st of this year, scientists from the University of Texas, Austin, and Washington State University published a paper in the prestigious journal, PNAS (Proceedings of the National Academy of Sciences).  It was titled: "Epigenetic transgenerational inheritance of altered stress responses."  Epigenetics is a relatively new field of science.  It is the study of heritable traits which are not produced by changes in the sequence of DNA, but rather by modifications of that DNA such as methylation.  Some of the same mechanisms are involved in how cells differentiate into different body parts even though all cells have the same total set of genes.  Many things can lead to Epigenetic change.  For instance it was found that there were inherited traits for the offspring of people in Sweden who experienced famine and that the traits were passed down several generations.   The recent PNAS study showed an epigenetic change related to exposure to a particular chemical - an old agricultural fungicide called vinclozolin.    Mother rats were exposed to a single, very large dose of that chemical.  This induced an epigenetic change, and the body weight and stress responses of the rat's offspring were altered in a way that was passed from generation to generation thereafter.
This is an interesting finding, but it is important to be clear about what this study does and does not show.  It shows that a substantial chemical exposure can lead to epigenetic change.  It does not in any way demonstrate that this or any other chemical can do this at the doses that we humans would ever receive in real life.  To investigate the question of whether a chemical might actually have epigenetic effects on humans would require a "risk assessment," and the authors have stated that that they were not attempting to do that.  However; when interviewed, one of the authors, David Crews, theorized that environmental exposure to things like DDT in the 1940s lead to increases in obesity and autism.  This leads one to wonder why the experiment was not done using DDT.  Andrew Feinberg of the Johns Hopkins Epigenetics center says that the theory is premature and cautioned about overstating what has actually been demonstrated.  The PNAS authors have overstated their case, and unleashed a storm of unhelpful speculation.

What Adams and many other writers classically (and irresponsibly) failed to do was to consider how much this experiment differs from real world chemical exposures.  Many chemical effects that occur at high dosages become irrelevant when the dose if low.  A high enough dose of many, ordinary, natural, chemicals (caffeine, capsaicin, even table salt) can kill rats in a lab study.  That does not mean that they pose any risk at the doses in which we often consume them.  The saying, "the dose makes the poison" is a bit of classic wisdom, but not something that a writer like Adams would consider (besides, a terrified readership makes better customers for the home delivered Organic and Non-GMO foods that Adams is hocking on his "informational" site).

I knew as soon as I heard about the PNAS article that people would begin to assume that this potential for chemically-induced epigenesis is a new worry with regard to pesticides.  After all, the study was done with an agricultural fungicide.  Fortunately, there is a great deal of publicly available information to demonstrate that the amount of vinclozolin that was given to these rats was huge in comparison to any relevant exposure for food consumers.

I wrote to the authors of the study to learn what actual dose of vinclozolin they had fed the rats (it was in an appendix I was unable to see on-line).  The dose was 100 milligrams per kilogram of body weight.  To put that in perspective, to give a 100 pound human female (45.4 Kg)  an equivalent dose to what the rats received, would require 4.5 grams of pure vinclozolin.  To visualize this a little, I weighed 4.5 grams of salt (see picture below).  That is a lot of any individual chemical to consume at one time! 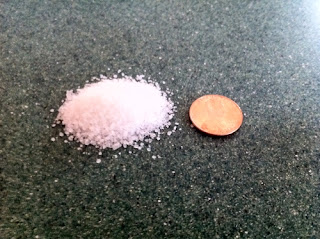 Next, I went to the data from the USDA's Pesticide Detection Program (PDP), the large sampling effort they conduct each year to find out exactly what pesticide residues occur in foods of various types (the same data set perennially misused by the Environmental Working Group to make their "Dirty Dozen" list.  During the years 1995 to 2008, trace vinclozolin residues were detected 1,058 times in crops like strawberries, table grapes, and green beans.  The average quantity of the fungicide detected was 0.13 parts per million.  It is better to look at the entire distribution of results.    The highest level of vinclozolin ever detected was 5.2 parts per million in one batch of strawberries in 1998.  Even if our imaginary 100 pound person ate strawberries from that worst-case batch, they would have to eat 1,923 pounds of them at a sitting to get the 100 mg/kg dose the rats got in the PNAS study.  The graph below shows the entire distribution of pounds of produce needed to deliver the study dose to a 100 lb human from actual residues. 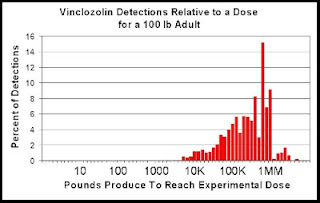 Clearly, there is no reason to think that real-world exposure to pesticide residues might cause the sort of epigenetic changes seen in the PNAS study.

What Would An Actual Risk Analysis Entail?

To do a risk analysis of this epigenetic phenomenon, vinclozolin would need to be fed to the rats at a series of different, lower doses in order to find the "No Effect Level."  It is almost certain that actual human exposure to vinclozolin in food is far, far below that level.  There is no rational reason to believe that pesticides like vinclozolin are "threatening the extinction of the human species."  Instead, they are making it possible for growers to provide us with food of high quality at a reasonable cost.  Vinclozolin served that role for a while; but not any more in the US.


A Short History of Vinclozolin

Vinclozolin was discovered by the German company, BASF in the 1970s and first registered for use in the US in 1981.  It was a fungicide that was active on a specific group of plant diseases caused by fungi such as Botrytis and Sclerotinia.  Every consumer that buys fresh produce has probably seen Botrytis which produces as a powdery mass of grey spores as it rots things (see effected strawberries below - Image from University of Florida).  Botrytis is one of the major causes of food wastage both before and after harvest of many crops.  There were not many very effective fungicides for these diseases in the 1980s, so the introduction of vinclozolin was welcomed by growers.  It was used for a period, but it has since been replaced by even better and safer options. 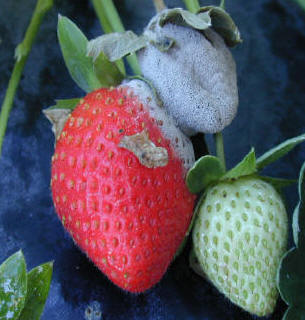 Vinclozolin is essentially non-toxic in acute, mammalian testing.  Rats can consume 50 times as much vinclozolin as in the PNAS study with no short-term effects.  However, over time, as EPA risk analysis became more and more comprehensive and risk tolerances were adjusted to safer and safer standards, it turned out that vinclozolin had some issues at high doses.  In an abundance of caution, actions were taken to make sure that risk was extremely low.  At first, certain uses of vinclozolin were restricted and extra worker safety standards were required.  Eventually, the manufacturer decided to simply withdraw the product and its use was phased out.  You can read the details of that history on the EPA website. Vinclozolin was never documented to cause any actual health problems, but it is a good example of our highly protective regulatory progress over time.  You can see how vinclozolin use declined in California in the graph below. 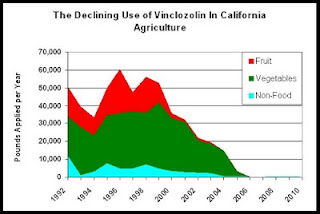 So, as interesting as this PNAS study is (a very high dose of a chemical can lead to epigenetic change), it is not a reason to conclude that this phenomenon is any sort of threat to human existence or the cause of a host of ills.  If chemically induced epigenetic change does occur, it is probably only relevant for vastly higher chemical exposures than ever occur with agricultural pesticide residues in food.   Humans can actually be exposed to far higher doses of certain nasty, natural chemicals like mycotoxins or certain phytochemicals.  Those would actually be a logical classes of chemicals to study for real-world epigenetic effects.

This recent PNAS article does not change the reality that we do not need to fear agricultural pesticide residues in our food, and that such fears only serve the economic interests of fear-based marketers.

You are welcome to comment on this site or to email me at savage.sd@gmail.com.  "Scream" image from Christopher Macsurak
Posted by Steve Savage at 11:51 AM