(This post originally appeared on Biofortified on 1/25/12)
A major international conference scientific meeting titled "Risk Assessment in Agricultural Biotechnology" was held at the University of California, Davis.  It was sponsored by the College of Agriculture, The National Association of State Universities and Land Grant Colleges, and the USDA.  It included presentations by eminent scientists from around the world and covered a wide range of topics including potential effects on non-target organisms, potential health effects, ecological risks, and the potential for "gene flow" for various crops.  There was extensive discussion of how to best regulate this technology, and what monitoring methods were appropriate.  There was also a discussion of potential impacts on community function in agricultural areas.  Finally there was an analysis of how risk assessment affects public perceptions of biotechnology. If you are reading this now, chances are you just missed it - by more than two decades!
I was fortunate to be able to attend this event and was reminded of it the other day when I found a copy of the proceedings while clearing out some old paper files (remember those?, see yellowed document below). 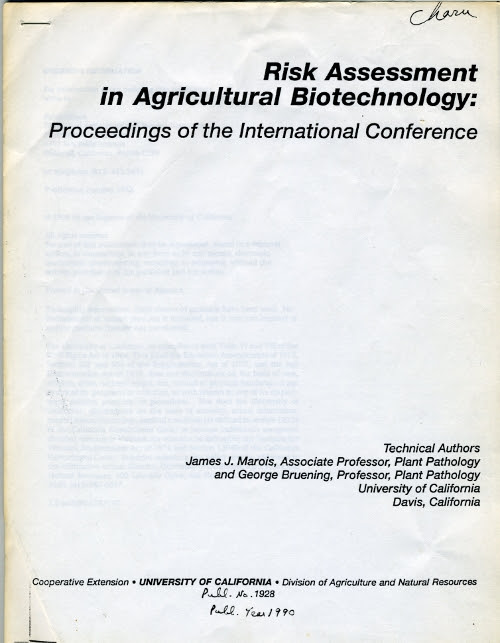 This conference was held in August of 1988 - nearly twenty four years ago!   The meeting was held was eight years before any "biotech traits" were commercialized in Agriculture.  Even at that time, these topics had already been under consideration for a long time.  I first became aware of these discussions at Stanford in 1977 - 35 years ago.


This Does Not Fit With Widespread, False Narratives About This Technology

The reason a bring up this meeting is that I often hear or read assertions that plant biotechnology was something that was abruptly introduced without precautionary review.  Nothing could be further from the truth.  I'd be surprised if there has ever been a technology that received this much scrutiny from a broad range of independent experts (most of the people at the 1988 event were from academia, not industry).  Some say there is insufficient regulation of the technology, but in fact regulators at the USDA, EPA and FDA spent years figuring out what aspects of the technology each would regulate. That was a major topic of discussion at the 1988 meeting, and there were many other opportunities for public input.

Looking back at the program from the 1988 meeting I was reminded that this risk assessment process was far from a rubber stamp.  There were several ideas that were never pursued commercially because the risks were deemed to be too significant.  For instance, it was decided that genetically engineered microbes should not be introduced live into the environment.  It was decided that GMO crops should not be introduced into areas where there have weedy relatives (e.g. sunflowers in the Midwestern US). There was the idea of improving the amino acid balance of corn (which is low in lysine) by incorporating the gene for the lysine-rich seed storage protein from Brazil nut.  Once the gene for the protein was isolated and expressed in a lab microbe, it was possible to test to see if that was the reason some people are allergic to Brazil nuts.  It turned out that it was the allergen, so the project was discontinued at that very early stage.  Some of the early examples of plant genetic engineering were done using something called the "gene gun."  That method often lead to insertions of multiple copies of the gene and so virtually all the work shifted over to the Agrobacterium vector approach - an organism from nature that is good at inserting single copies of genes into plant cells.
Sixteen years and billions of acres into the biotech crop revolution, it seems that the prior years of risk assessment have paid off.

You are welcome to comment here and/or email me at savage.sd@gmail.com
Posted by Steve Savage at 8:26 AM