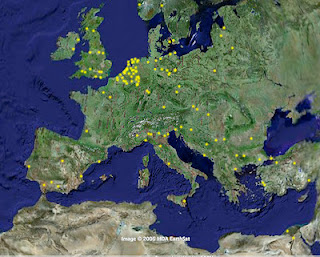 In the early to mid 1990s, European research institutions and start-up companies were at the forefront of the new science of plant biotechnology.  Nearly 20 years later, BASF, the last European company trying to commercialize GM crops for use by European farmers, has decided to give up and shift its resources to the Americas and to Asia.  Even though extensive reviews by European scientists have concluded that the technology is safe, the social and political climate in Europe has proven to be too hostile to justify continued investment for that continent.  I have known and worked with many European plant scientists over the years, and most of them find this all very frustrating.

This move is almost certainly rational from a business point of view, but it stands in stark contrast to the enthusiastic "Green Biotechnology" strategy that BASF was talking about as recently as 2005.  The last slide in that presentation has the obligatory, and ultimately prophetic disclaimer: "This presentation contains forward-looking statements under the U.S. Private Securities Litigation Reform Act of 1995....Many factors could cause the actual results, performance or achievements of BASF to be materially different from those that may be expressed or implied by such statements."


What Are The Ramifications of this Move?


What does this mean for the future of plant biotechnology?  It probably changes little except that BASF now joins the other major European agricultural science companies (Bayer, Syngenta) in focusing their efforts in the parts of the world that have widely adopted GM technology for the major grain and fiber crops. It probably means that European farmers will never get to grow a potato that is resistant to one of its most serious diseases - Late Blight, the famous cause of the Irish Potato Famine.


Europe will continue to benefit from biotechnology advances in terms of the food and feed that it imports.  Recently a number of additional crops with biotech traits were approved for all but growth in Europe.  Indeed, Europe will probably continue in its trend toward becoming increasingly dependent on imports to feed itself.  We in the US are also becoming more import dependent for our fruit and vegetable supplies, but not also for the major cereals and feed crops as with Europe.  As I wrote recently, there are some disturbing trends in the price of foodstuffs in international trade.  Europeans can afford higher food costs far better than many poorer countries with whom they compete.  Biotechnology might have reduced that demand, but BASF's move simply punctuates what has been a long-term issue in that regard.


The other thing this will mean is that the suspicions of GM crops in African countries will continue to be reinforced.  As Robert Paarlberg has so clearly documented in his book, "Starved For Science," the hesitation to accept the technology in Europe translates into delays or bans for potentially life saving technology for a part of the world that could use it the most.


You are welcome to comment here, or to email me at savage.sd@gmail.com