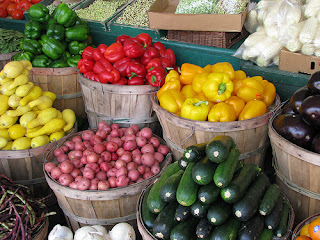 (This post originally appeared on Sustainablog on 3/16/11.
For links to all my posts on various sites click here)

I have posted a number of blogs and documents over the past two years that address some of the common myths about Organic farming.  From that, one might conclude that I am “anti-Organic,” which I am not.  There are many things about Organic that I have appreciated ever since my grandfather first taught me about it in his Organic garden in the 1960s.   I appreciate them more as an agricultural scientist.  I would like to address five positive features in this post, and then tomorrow I will talk about the 5 things that I see as most limiting for Organic.

One often hears the argument that the world was always fed by Organic until the early 20th century.  That is not at all true.  Pre-industrial agriculture in the US and elsewhere was degrading the soil through tillage and depleting its nutrient stores.  It only “worked” because the population was small, and there was new, “virgin land” to exploit.  The greatest contribution of the Organic movement of the early 20th century was its recognition of the importance of building soil quality in terms of organic matter content and the complex aggregate structure and biological activity that come with that.  Neither pre-industrial farming or early industrial farming had that soil health focus.  The importance of soil health is much more widely appreciated today, but it started with Organic.


2. The Use of Cover-Cropping and Biological Nitrogen Fixation

Cover cropping is the practice of planting a single or mixed stand to grow after an annual crop is harvested so that it grows until winter sets in and then again in the early spring before planting of the next crop.  This cover crop is not harvested and serves instead as a way to “feed” the soil ecosystem and build up organic matter.  The cover crop can include legumes which have the ability to “fix” nitrogen from the air (with the help of a bacterial symbionts) and reduce the amount  of nitrogen fertilizer that is needed for the following crop.  This practice in not unique to Organic but is more common on Organic farms.  Annual crops followed by cover crops are a reasonable imitation of the perennial prairie biome that created such fertile soils prior to cultivation.

Crop rotation is a good idea for any kind of farming.  It breaks pest cycles.  It spreads out risk. When legumes are in the rotation it reduces nitrogen fertilizer needs.  The USDA Organic rules don’t specify any specific degree of rotation, but diverse rotations have been a long tradition of Organic farming.  Conventional farmers cancertainly rotate crops, but since they are using leased land and since they get no “Organic price premium,” it can be economically difficult to justify planting anything other than the 1-2 most profitable crop options.


4. Fostering Biocontrol of Pests Where Possible

Some broad spectrum insecticides used in Conventional farming kill off the other "good bugs" that could otherwise suppress the population of pest insects.  Organic growers can use pesticides that qualify as “natural” and these are generally not disruptive to natural biocontrol.  Some Organic growers also release biocontrol insects.  Conventional growers who employ Integrated Pest Management practices (IPM) are also fostering biocontrols.


5. Opportunities for Marketing Quality Options under the Organic Brand

Because Organic has become a widely recognized consumer brand, and since customers are used to the idea of paying premium prices for Organic, it makes it easier for growers to find markets for specialty items like heirloom tomatoes, purple fingerling potatoes, certain specific sweet corn hybrids, unusual grains…  This is a nice addition to the diversity of our diets.
These are five significant and good features of Organic.  They are also increasingly characteristics of progressive, conventional farming.
You are invited to comment here and/or to email me at feedback.sdsavage@gmail.com