A Surprising Reason We Don't Farm As Sustainably As We Could 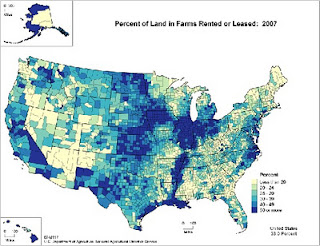 (This post originally appeared on Sustainablog on 3/22/11.  For links to all my posts on various sites click here)
I recently posted a description of a highly sustainable form of row crop farming that combines high productivity with low environmental impact.  This is not just a theoretical vision but something which is actually being practiced on a significant commercial scale (e.g. non-tillage, cover cropping, controlled wheel traffic, variable rate fertilization...).  It is difficult to know exactly how much American farmland is being farmed this way because the only agency that tracked things like tillage practices (CTIC) lost funding for that activity during the Bush administration.  Knowledgeable observers that my business partners and I have interviewed estimate that something like 5-6% of our major crops are farmed with the full suite of sustainable practices. Still, to solve an issue like the Dead Zone in the Gulf, to sequester a great deal of carbon in soils, and to effectively "drought-proof" our land to deal with climate change, one would like to see a much higher percent of optimized farming practices.

Why Aren't These Practices More Common?

A key reason that farmers don't farm as sustainably as they could is that they rent most of the land they farm.  It doesn't belong to them. The map above shows the prevalence of leased land for farming in the US. Much of the land in the most productive regions is rented.   This is simply an historical artifact.  Over the last century there has been a steady migration of the population away from farming to cities.  The families that once farmed still own the land, but they lease it to the few who have continued to farm.
It takes several years (4-6 typically) to realize the "pay-off" of improved soil quality that results from using the most sustainable practices.  In the process there is added cost and  risk.  It definitely requires a long-term view to make the transition.  Long-term commitment is simply incompatible with year-to-year leasing.  A grower cannot afford to take these risks if it is uncertain whether they will be the one to lease that field in the future.  In the past farmers often rented from someone they knew and therefore they had more confidence in the stability of their lease.  Increasingly, those personal relationships are lacking, and the landowner rents to whomever will pay the most on a year-to-year basis.

Ironically, it is in the long-term interest of the land owners to work with farmers to improve their particular property because they will ultimately be able to rent for a higher price in the future.  Cash rents (the amount charged to rent a given piece of land) are the most sensitive measure of the productivity of a given piece of land.  Farmers are well aware of which properties have the most potential, and they compete with one another to be able to rent the best mix of land.

How Can This Barrier Be Overcome?

Transitioning a given field to the sustainable ideal is a non-trivial exercise that takes both dedication and expertise in addition to technology and money. Realistically there are a sub-set of growers who would be the best candidates for the first few years.  If a way could be devised for those growers to participate in the up-side, there are many other growers who would be able to maintain that land quality while the "transition experts" moved on to other fields.
What is needed is a fundamental change in the structure of farm leases.  There is the need for an enlightened base of land owners who see both the economic and environmental benefits of such an arrangement.  I believe that there is the need for major environmental groups to partner with grower organizations to champion this cause with the broader public.  There may also be a role for the federal or state government in encouraging this change.
We could definitely expand the amount of highly sustainable farming in the US and we need to do so to meet growing demand for food and to do so in the best possible environmental scenario.  The barriers are not really technical or philosophical.  They are structural, educational and economic.
You are invited to comment here or on my website or by email at feedback.sdsavage@gmail.com
Map of Leased Land from the USDA
Posted by Steve Savage at 10:27 AM