Ten Thousand New Reasons Not To Worry About Pesticide Residues 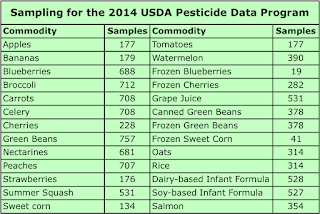 Each year, the farmers around the world who produce our food (fruits, vegetables, grains) get the equivalent of a “grade” on a giant “group project.”   For 2014 they got another A+ as they have for many years.  The “test” entails thousands of food samples, which the USDA collects from normal US food channels and then scrutinizes for pesticide residues using extremely sensitive laboratory testing methods. They are checking for any detectable residues (41% of samples have none) and whether any of the detectable residues exceed the conservative “tolerances” set by the EPA (99.6% of the samples met that exacting standard). This means that our regulatory/farming system is working extremely well! Farmers are able to produce crops without the inefficiency and quality issues associated with excessive pest damage, and consumers are able to safely enjoy what they grow. The official conclusion from the USDA is “These Pesticide Data Program data show that, overall, pesticide residues found on foods tested are at levels below the tolerances established by the U.S. Environmental Protection Agency (EPA) and pose no safety concern.”

Chemical pesticides are only one part of the pest control regime, but an important one. The chemical pesticides in use today are predominantly low in mammalian toxicity, but for all pesticides the EPA sets detailed rules for how they can be used (e.g. maximum rates, periods of time before harvest…). These are designed to ensure that any residues that remain at the consumer level are below a “tolerance” based on a rigorous, multi-factorial risk assessment by the EPA. The tolerance is generally 100 times less than a dose that could cause any ill effect.  The allowed residues are also lower than the levels of natural pesticidal compounds that many crops make to defend themselves.

The 2014 USDA “test” is called the Pesticide Detection Program or PDP, and it has been conducted every year since 1991. For 2014 tests were done on 10,750 samples including 21 types of fruits or vegetables, two grains, two types of infant formula and salmon. The scientists detected a total of 22,890 specific pesticide residues of which 98.5% were below tolerance or at such low levels they couldn’t even be properly quantified (see table below). 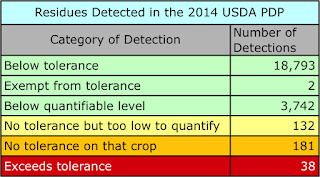 I appreciate the fact that the USDA makes this data available and transparent. It allows us to see that not only are most of the residues below tolerance, a great many of them are more than 10, 100 or even 1,000 times lower than the tolerance (see column chart below - all to the left of the center bar are no-issue detections, but 84% are far below). 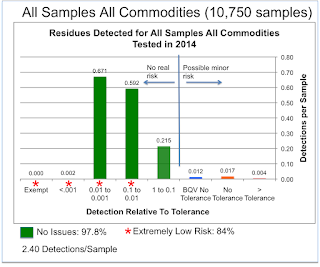 There are some minor differences between crops. In the two charts below, the light green bars show how many of the detections in a given crop were below tolerance, and the dark green bars show what percent were 10 or more times lower than the tolerance. The samples of infant formula had, happily, either no detections (dairy-based formula) or a few detections that were between 1000 and 5000 times lower than the very low tolerance (soy-base formula, 7 of 527 samples). Oats and rice also had few detections and those at very low levels. 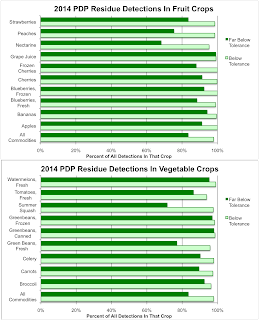 Unfortunately, the very transparency which documents the safety of our food is grossly misused by an organic industry-supported organization called the Environmental Working Group. EWG conducts its own “analysis” of the data in which they completely ignore how the detections differ from one another and how they relate to the tolerances. Their choice to represent as “dirty” any residue, no matter how low or non-toxic, conveniently ignores the fact that similar pesticide residues are also regularly detected on the organic options that they promote. Hopefully they will refrain from such irresponsible fear-mongering this year.
So, at the risk of being like a parent who only focuses on an A- on a report card of all A+s, I looked in detail at the 1.5% of residues were of any potential concern. For the few detections that exceeded tolerance, most were only marginally higher and thus of very minor concern.  There were some residues detected for which there was not a tolerance for that specific crop, but in most of those cases the levels were lower than the tolerances for other crops.  The EPA also tests for some old, long-banned pesticides notorious for their environmental persistence. There were 18 detections of such materials, including three from organic samples.  Of those 18, 17 were at extremely low levels and only one was very significant (0.46ppm monocrotophos in a squash sample from Mexico).  All in all, I could only find 11 residue examples of moderate concern, which is an amazingly small number (0.045%).  I have posted a much more detailed analysis on Scribd.  If anyone is interested I'll be happy to email you that full summary.
So once again, the take-home message is that we have another 10,000+ reasons to confidentially enjoy our American food supply.  My congratulations to those who produce it for us.