A Closer Look At Organic Pesticides In California 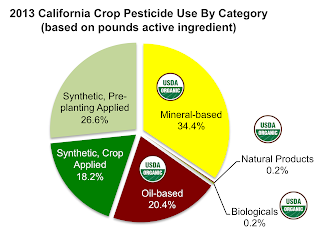 I've posted an article on Forbes taking a general look at the role of organic-approved classes of pesticides in California.  The take-home points are that pesticide actives that are approved for use in organic made up 55% of the total crop use in 2013 and that those are used by both organic and conventional growers.  I also take a look at the relative toxicity (simple acute ingestion toxicity) and there is a similar range for the organic and synthetic options.  None of this is surprising because what determines whether a pesticide can be "organic" is whether it is "natural", and that is not a safety-based criterion.  The safe use of all pesticides is the responsibility of the EPA and similar regulators around the world. 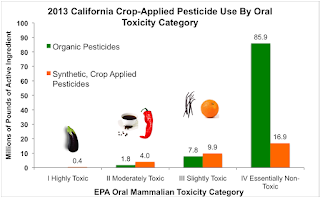 In this post I'd like to delve in more detail into what these widely used organic pesticides are and why they are used by all sorts of growers.


In the first graph in this post I've divided the organic-approved materials into Mineral-based, Oil-Based, Natural Products and Live Biologicals.  I'll talk about each category below.


The mineral-based pesticides that are approved for organic include sulfur, lime-sulfur, and various forms of copper. Together these materials comprise 34% of the pounds used but only 12% of the area treated. That is because these are relatively high use-rate materials (~2 to 25 pounds/acre).


Sulfur has been used as a pesticide since ancient times. While it is essentially non-toxic by ingestion, as someone who has worked long hours in treated vineyards, I can tell you that it is quite irritating to the eyes and skin. Sulfur controls powdery mildew fungi and suppresses spider mites, but has to be reapplied every 7-10 days. It works by sublimation (direct transition from solid to gas) so it is ineffective if it is cold and can burn the crop if it is very hot. It is converted into reactive sulfur compounds in the humid boundary layer of a leaf or berry.  Conventional growers have alternatives that need only be applied at ounces/acre every 14-21 days, but continue to use some sulfur in their programs as a way to manage resistance to the newer materials (see chart below for the trend in sulfur use on premium California grapes).

The next big mineral-based material is lime sulfur.  It is used for some dormant season sprays, so its “moderately toxic” status (EPA Class II) is not an issue for crop residues.  The remaining organic mineral pesticides are the copper-based fungicides which were discovered in the late 1800s and actually saved the European grape industry when a downy mildew pathogen was introduced from the New World. Some of the copper products are Class II in terms of oral toxicity, can be persistent, and are toxic to aquatic invertebrates, but with appropriate care for where they are used, they are considered safe . Again, conventional growers have lower rate, longer interval, more effective options, but use some copper for resistance management. Coppers are also one of the few options for the control of certain bacterial diseases and for algae control in rice fields.

An interesting organic-approved category is a collection of oils derived from petroleum (mineral oil, paraffinic oils, petroleum distillates…). These too are relatively old products used at high rates, but they are effective on mites, aphids, whiteflies, scale insects and also powdery mildews. These are also EPA Category IV – “essentially non-toxic” to mammals by ingestion.  Again, they are also used by conventional growers along with other more modern options.

About 2% of the acre-treatments on California crops were with various “natural products” which are chemicals that are made by plants or from fermentations of various microbes (thus qualifying them for organic). Nature is indeed a remarkable chemist, but that is not a guarantee of safety. Some of the most toxic chemicals known are from nature. The safe use of these materials is based on the same, elaborate risk assessment that agencies like the EPA conducts for all pesticides. The most widely used natural product is the plant hormone gibberellin (540,000 acre treatments). The next biggest product (309,000 acres) is Spinosad which was introduced by Dow Agrosciences. It comes from fermentation of an actinomycete. It’s a remarkably complex chemical, but very low in mammalian toxicity (Category IV) and quite effective against all sorts of caterpillars and hard to control insects like leaf miners. Unlike the mineral or oil-based pesticides, it can move inside of the treated plant to protect newly emerging leaves.  Lately it has become available to homeowners as “Captain Jack’s Dead Bug Brew” which is a sort of silly name, but definitely something I use in my garden.

The number 6 natural product (22,500 acres treated) is a relatively recently developed, plant-based natural product that comes from a plant called Epazote or American Wormseed. The small, California company that commercialized it was purchased by Bayer Chemical Company. They have since introduced a product in Europe which is made of a mixture of the same four terpene chemicals that occur in the plant extract. That sort of product often generates much debate in the organic community about whether it is still natural, but the chemicals are the same. In any case this product is effective against various insects including thrips which are difficult to control. That is why it will be increasingly used by both organic and conventional growers.

The smallest category of organic-approved products are the biological control agents. The most used and famous of these are various strains of the bacterium Bacillus thuringiensis, or “Bt.” These bacteria make a protein that is selectively toxic only in the guts of certain insects (e.g some work only on caterpillars, some only on beetles and some only on mosquitoes). Together, 10 Bt-based products were applied to 320,000 acres. Some crops have been genetically engineered to express these same Bt proteins, but those would not qualify for organic. Sweet corn has been modified this way, but the sweet corn growers have been asked by their retail store customers not to use the "GMO" varieties. Instead they must make at least six more sprays a season than they would need to if they could use a Bt variety. That is a shame.

The "natural" pesticides that are approved for organic also have an important role in conventional agriculture.  They are not qualitatively less toxic than synthetics, but then virtually all the pesticides used today are only moderately toxic at most and most commonly non-toxic in the classic sense. These and the modern synthetic pesticides play an important role in the efficient use of the land, water, fuel and labor that it takes to produce food.