The above video is making the rounds on social media in which a young girl named Elise describes her science project. Elise wants to sprout a sweet potato plant from a conventional sweet potato she purchased at her local grocery store, but it doesn’t work.  Her grocer gives her the explanation that the sweet potato was probably treated with a sprout inhibitor chemical called Sprout Nip®.  She tries again with an organic sweet potato, which sprouts much better.  Elise finds some information about the mentioned inhibitor, and then concludes that this is a good reason to buy organic.  The little girl is articulate and convincing, but in fact she is straight up wrong about the sweet potatoes. She also lacks some important perspective on the role of sprout inhibition in the sustainability of the food supply.

It’s a good example of how social media can be a misleading source of "information" about food and agriculture.

I heard about this video from a blogging friend named Amanda who does some great posting as The Farmer's Daughter USA. We decided to work together to frame a response for both of our readerships.

I've never really worked on projects involving sweet potatoes, but it was an easy matter to determine whether Sprout Nip(r) is a sprout inhibitor used for that crop as the grocer told the student.  The EPA approved labels for crop protection products are all available on-line.  The label for Sprout Nip does not list sweet potatoes among the approved uses.  Unlike the pharmaceutical industry, where a doctor can prescribe a drug for something other than its original use, it is strictly illegal in agriculture to use a product unless it has been approved by the EPA for a specific crop and use scenario.

So the grocer mislead the student, but was he was just wrong about the particular chemical?  Again, it wasn't hard to find a comprehensive document from North Carolina State University about post-harvest handling of sweet potatoes.  That document clearly states that, "chemical sprout inhibitors are not used in sweet potatoes because proper temperature control inhibits sprouting."  I also checked with one of the expert authors of that document, and she confirmed that there is no need for sprout inhibitors if sweet potatoes are properly "cured" by holding them at the right conditions soon after harvest.  So the difference the student found between the conventional and organic sweet potatoes had nothing to do with a chemical sprout inhibition treatment - neither the conventional or organic sweet potato had been treated with one.  It is more than likely that the reason there were differences in sweet potato sprouting was merely due to their ages and how these were stored.

In any case, the "good reason to buy organic" conclusion from this "experiment" was simply wrong.  I don't blame the student, but rather the adults who "helped her" reach such a conclusion.  I hope little Elise has a continuing interest in science and eventually learns about how to design experiments with appropriate controls and sample sizes, and learns about not jumping to ideological conclusions that your data can't support.

The other problem is that this video fails to provide any perspective on the important role of sprout inhibitors for the sustainable production of the crops where they are actually used.   Recently, a number of food commentators have rightly been emphasizing the importance of reducing food waste, not just producing more food.  What few acknowledge is that there have been people working hard to do exactly that for several decades.  Sprout inhibitors are one prime example of waste reduction.

Why Are Sprout Inhibitors Used On Regular Potatoes? 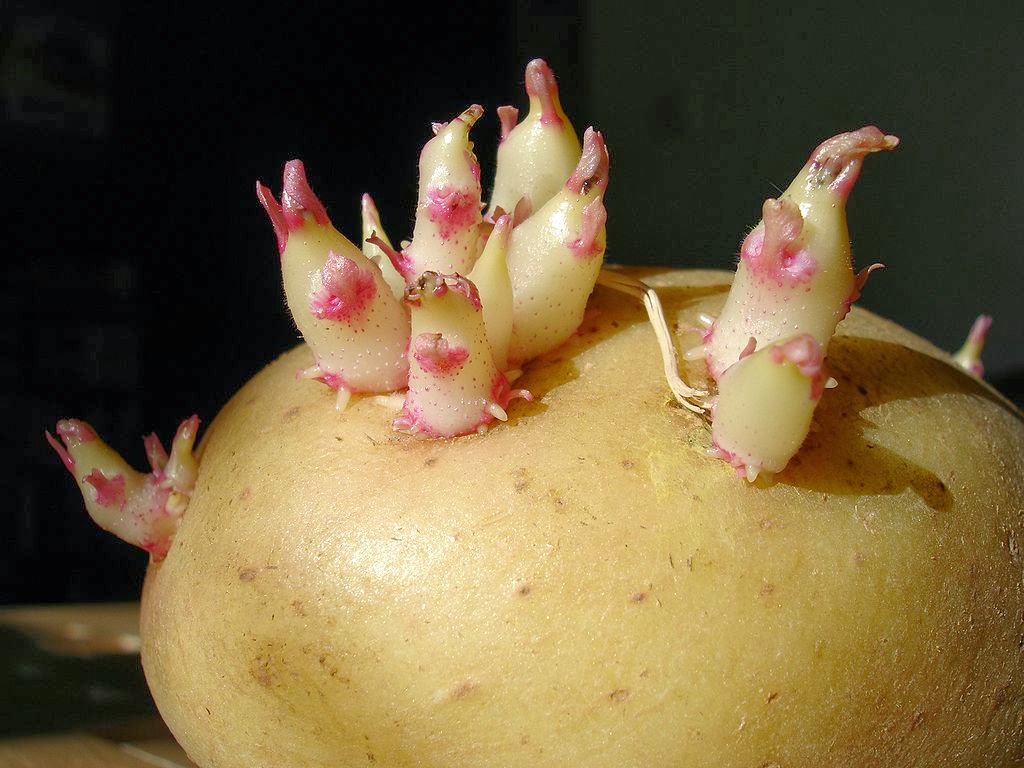 The sprout inhibitor that Elise describes, chlorpropham, has been an important tool for regular potatoes for nearly 50 years.  It is better known in that industry as CIPC.  Most of the spuds grown around the world are called "fall potatoes" because that is when they are harvested.  For centuries, people have spread out that supply by putting the potatoes into a cool, dry storage facility of some type - originally just a "root cellar" and in recent times large storage facilities that can handle millions of pounds.  If the potatoes are stored at a temperature that is best for quality, they will eventually begin to sprout.  Most consumers have had the experience of potatoes sprouting in their pantry because we generally store them at room temperature.  Without the ability to control sprouting, there would be no way to maintain the consumer and restaurant supply of fresh potatoes for a good part of the year. This is even more of an issue for the increasingly popular colored potato varieties. The sprouts are also rather toxic. For the part of the crop being held in storage longer, there would be substantial waste because it isn't always possible to predict when a given lot will start sprouting.

By the way, organic potatoes have to be treated with a sprout inhibitor as well.  Currently their best option is clove oil.  Because it is less effective, it has to be applied as many as 5-8 times during the storage season.

Longer term storage is also very important for the substantial part of the potato crop that is processed to make frozen fries and other products.  Without the ability to prevent sprouting, it would not be possible to spread processing of the fall crop over most of the year.  That would mean needing to build a great deal more processing capacity and then to have it sit idle for many months.  The processed potatoes would also have to spend longer in low temperature storage.  All of these things would increase the capital cost, energy requirements, and ultimately the consumer cost.  In addition, storing potatoes at low temperatures will increase the sweetness of the potatoes and this is undesirable from a taste standpoint. That is the reason why, one should never store their potatoes in a refrigerator.

As for whether CIPC is safe, as an older product in use for over 50 years, it has been through multiple cycles of close scrutiny by the EPA and regulatory agencies around the world.  You can read a detailed risk assessment from the EPA, which determined that if potatoes had residues below a new, conservative threshold of 30ppm (parts per million) they would be safe for consumers.  Potatoes have been tested in the USDA's Pesticide Detection Program (PDP) 9 times since 1992, and none of the detected Chlorpropham residues were even close to that level.  Some export market countries have set lower thresholds (e.g. 10ppm for the EU), and a few of the historical detections have been at that level.

Thus, there has been interest for some time in finding an alternative way to prevent sprouting.  There is a very good article about all this in Spudman magazine (seriously - there is a potato trade journal by that name - I used to have a subscription). Nevertheless, many grocery chains and restaurant chains are actively looking to drastically reduce the amount of CIPC on the potatoes they buy.

A Next Generation Sprout Inhibitor

A few years ago, a scientist named Dr. Rick Knowles at Washington State University captured natural, volatile chemicals that came from potatoes.  He analyzed them and reapplied several of the products back to potatoes. He found that certain unsaturated ketones and aldehydes caused sprout suppression.  Many of these chemicals are known, food-grade flavoring agents. One of those was subsequently licensed and commercially developed by AMVAC under the trade name SmartBlock®.  It was approved for sale in 2013, and is already getting lots of traction in the industry.  Growers are finding it to be a good replacement for CIPC.  In Europe (where CIPC is also under some pressure), it may be approved for use as well.  It is more expensive than CIPC, but probably not enough so for consumers to see any noticeable price change to the cost of raw potatoes, French fries or chips.

SmartBlock(r) is based on a "natural product," that is to say that it's active ingredient, 3-decen-2-one, is found in foods such as yogurt, tuna fish, soy, mushrooms etc.  Having that "natural" status is certainly helpful for marketing, but in fact that does not automatically mean anything about its relative safety.  There are natural products that are extremely nasty - this just does not happen to be one.  It is in fact on the GRAS list: Generally Regarded as Safe, which is a list maintained by the Food and Drug Administration (FDA) for use as a direct food additive in things like baked goods, non-alcoholic beverages etc.

The actual importance of being a naturally occurring compound is that there is a much lower cost pathway for registration for such products through the EPA (as a Biopesticides).  The requirement is that the material passes Tier I toxicity testing with flying colors. That is important because even the entire global potato storage market would not be a big enough market to justify the huge investment it takes to commercialize a new, synthetic product.

It seems likely that SmartBlock may replace a fair amount of the use of CIPC on potatoes, but it will take time to learn how best to use it to prevent food waste.  The company is trying to get it approved for organic potatoes as well, but whether it will be allowed for that use is currently unclear.  Even though one can find the chemical in nature, it is not at all practical to get enough of it by extracting it from those sources such as yogurt or tuna fish!  SmartBlock is made synthetically, but it is the identical chemical to what is found in natural sources and is 98% pure.    This is not a situation like vanilla extract where the artificial vanilla only represents one chemical in a complex mixture.  It’s also not like some vitamins which are less bio-available from synthetic sources.  Even so, the rules for organic are based on a philosophical preference for "natural," not on chemistry or safety alone.

Elise’s appealing little video, which has gone viral on a lot of organic websites, is a classic example of how the "information age" can become the "disinformation age." There is actually a ton of relevant information available on the internet, but when people lack proper background, and when they come to a question with a pre-existing bias, it is all too easy to just find what you want or expect to find.  That is what happened in this case, and so this young student ends up being an effective transmitter of "information" that is simply wrong.