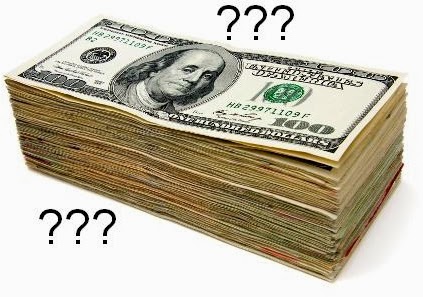 Because I blog, speak, and comment in support of various agricultural technologies, I am routinely accused of being a "shill for Big Ag" or for some company which you can probably guess.  They believe that I am somehow paid to say what I say.  If I am a "shill,"  I'm clearly not doing it right.  Either that, or there is in fact no money in the shill business.

When I've met some fellow farming and technology advocates, we often joke about this. "Did you get your Big Ag check yet?  Mine doesn't seem to be coming?" While I'm sure there are people who will never believe this,  in 5 years of advocacy I have never been offered any money, nor do I know of anyone else who has. There is no formal or informal "Shills-R-Us"organization or whatever it is that some people imagine. In actuality, there is a relatively small community of people who choose to defend agriculture and its supporting technologies, and they do so by committing their own time and effort without compensation.

Why do we do this?  I’m sure the there are many reasons, but making money isn’t one of them. In fact, choosing to speak out on the hot-button issues around food and farming is much more likely to detract from a career.  Cami Ryan, a social scientist who both advocates for agriculture and studies the public debate about it, has documented the practical reality that when University faculty members take time to advocate, it only detracts from time spent on the criteria by which their careers are advanced (publications, grants…).  I’m very glad some academics are still willing to do it.  I’m also very glad that there are members of the farming community willing to take time from their busy lives to speak out.  Besides, anyone who actually knows scientists or farmers realizes that they are fiercely independent people who would not like anyone telling them what to think or say.

I'm a somewhat unusual member of this advocacy community in that I'm very much an industry insider.  In the past I've worked for a large technology company, DuPont, and also for a small, start-up technology company, Mycogen.  Since 1996 I've been an independent consultant working for all sorts of different companies in the agricultural technology space - pretty much all of them at one time or another.  Over those years I've done projects on a wide range of technology, marketing and sustainability questions, but none of that paid work has had anything to do with the advocacy work I've been doing since 2009.  In fact, the substantial amount of time I've spent on blogging etc has had the effect of reducing my consulting income. My writing has also compromised my consulting business to some degree. My visibility in a controversial and acrimonious debate is problematic from the perspective of some of my clients.  My writing has led to some speaking engagements, but when I do get an honorarium for those, it does not begin to cover the lost potential income.

One major reason that I continue to spend time blogging, and the reason I shrug-off the shill accusations, is that I feel an obligation to share the perspective I've gained specifically because of being an industry insider for more than 35 years. The industry and farming communities I know are not anything like the picture often presented by critics of agriculture. After years of listening to unfair demonization of the creative, thoughtful, ethical people in agricultural industries, I felt compelled to try telling their side of the story.  I've had the privilege to know and work with many people in industry and academia who have developed key tools for farmers.  I've had the privilege to sit down and talk about technology issues with diverse groups of farmers.  I've spent quite a bit of time with a variety of regulators who are charged with assessing risk in these fields.  What I've seen is that people associated with farming are not at all like what appears in the dismissive and or conspiratorial narratives that abound.  Yes, I'm an industry insider, and I'm proud to be a part of that sector.  I don't blame anyone for taking my potential bias into consideration, as long as they will still consider logic and facts.

Another reason that I continue to blog is that I'm saddened to see so many people who view their food supply with fear and/or guilt. Those of us who live in the rich world have access to a remarkable range of delicious, safe, nutritious, food options.  However, we are inundated with voices telling us otherwise and giving us inappropriate and sometimes outright terrible advice about food.  One of my goals is to give consumers some background to use to better sift through the onslaught of often confusing and misleading "information" that abounds.

The final reason I continue to advocate for certain technologies and for the right of farmers to use them is that I believe it matters.  There is an important ethical dimension, not just to what technologies we use, but also to those we do not use or do not develop.  There are significant ramifications for the future of the food supply in the rich world, but vastly more important ramifications for those outside of the rich nations.  I'm not saying that technology X or Y will "feed the world." It's never that simple. But the truth is that farmers are the only ones who will feed the world, so it's time to pay attention to the tools they find most useful for doing so.

I know that I am unlikely to influence almost anyone who thinks that I do this because I'm a "shill."  My hope is to offer an alternative perspective for those who are still open-minded enough to weigh facts, data, and personal experiences.

As always, you are welcome to comment here and/or to email me at savage.sd@gmail.com.  I tweet about new posts @grapedoc