A Modest Proposal About How To Do GMO Food Labeling Right 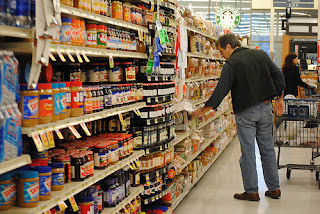 Should food with ingredients from genetically engineered crops - "GMOs" - be labeled?  Many argue that consumers have a "right to know" about this.  Ok, if the real reason for labeling is to provide consumers with knowledge, then the label should read:

"Contains ingredients from biotech enhanced crops approved by the USDA, FDA and EPA"

That would tell people what is unique about these crops.  Humans have been genetically modifying crops for centuries using a variety of methods.  The difference for genetically engineered crops is that they must be fully characterized and tested in order to gain approval from three different regulatory agencies - the USDA, the EPA and the FDA (there is a description of this process below if you are interested).  Crops modified in other ways including those generated by conventional breeding, mutation breeding or "wide crosses" or hybrids or doubled haploids don't have to be tested or approved at all.  The clear, international scientific consensus is that genetic engineering involves no unusual risk relative to all the other methods of genetic modification, but this testing was instituted out of an abundance of caution.  Thus, any label should let consumers know about this extra level of scrutiny conducted for their benefit. 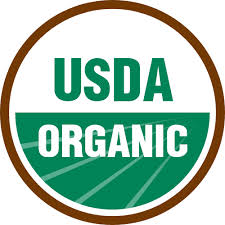 We have a precedent for a positive, official label designed to communicate government oversight. This is the federally regulated "USDA Organic" label that signifies that the agency governs the certification process for that food.  The biotech food labeling should be of this same affirmative nature because of the extraordinary review from three agencies.  We also have warning labels for real risks like certain allergens and for trans-fats, but that kind of labeling is inappropriate for genetically engineered crops.  On the contrary, there are hundreds of peer reviewed scientific studies that looked for and failed to find health issues associated with these foods.

Let's Really Make It About Knowledge

Also, if we label genetically engineered foods, we should accompany that with supporting educational resources.  We have some experience as a country about what happens if you label but don't educate. Back in 1994, Congress passed the "Nutrition Labeling and Education Act" that lead to that list of nutrient contents you see on food packages.  The lawmakers never followed through to provide the funding for the education part (imagine that!)  So the law effectively became the "Nutrition Labeling in a Vacuum Act" and many consumers get little benefit from the labels.  Let's not repeat that mistake with a "GMO Labeling in a Vacuum" law. 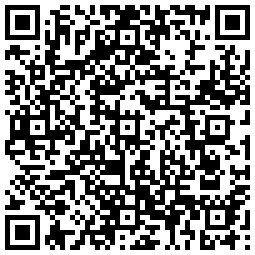 Accompanying the label I have described, there should be a URL or a code stamp to take you to web sites that explain how these crops are developed, how they have been evaluated, and also about some of their advantages. The site could talk about how:

Congress could even fund an educational program to provide basic nutrition education which should have started 18 years ago.

If some politician will introduce a bill to require labeling of the type I have described and include guaranteed funding for real education, they could get the enthusiastic support of the scientific community.

Would my labeling suggestion satisfy the groups that have been promoting "GMO labeling?"  Probably not. There is pretty strong evidence that their goal is not really about what consumers would "know."  It seems more likely that it is about wanting consumers to be afraid and thus to buy more of the organic, certified non-GMO, or under-regulated supplements they sell (look who provided the money to push prop 37 in California).  The clue is the typical imagery used by these labeling promoters and their allies.  It usually involves the meme of a large, scary looking hypodermic needle filled with a suspicious, liquid being injected into something like a ripe tomato. 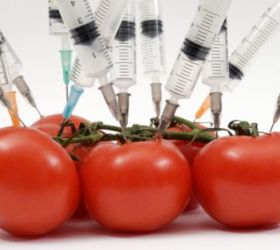 That image bears absolutely no relationship to how plants are genetically engineered.  It is a transparent attempt to frighten people.  Thus, if the labeling were to actually let consumers know enough not to be afraid, it wouldn't accomplish the financial goals of many of the groups pushing labeling. It might even reduce their sales.

I salute my fellow Californians for voting down Proposition 37, a deeply flawed GMO labeling initiative which would have been a consumer knowledge disaster for the financial benefit of certain folks who really don't deserve it.  As a scientist and someone who cares deeply about food, I could endorse a food labeling law like the one in my modest proposal.

You are welcome to comment here and/or to email me a savage.sd@gmail.com.  I tweet from time to time @grapedoc.  Shopping image from Anthony Albright. Code stamp image from Allprostamps.com.  Tomato image from Global Research Canada

Additional Background About How These Crops Are Regulated

For those that are interested here is some background.  GMO crops, those that have been modified using the tools of genetic engineering, go through a degree of composition and safety testing which has never been required for other means of improving crops - even methods such as mutation breeding or wide crosses which have far more potential for undesired effects.  These new crop varieties are scrutinized by no less than three federal regulatory agencies under a system called "The Coordinated Framework" that was hammered out in the 1980s and 1990s well before any GMO crops were commercialized.  Historically most regulation of industries has been instituted after there has been a problem.  GMO foods are rather unique in that the regulations were designed before there was any commercialization and in the absence of any problematic events.

How Does The Regulation Work?

The USDA scrutinizes any potential for the crop to be a "plant pest risk" and any sort of gene transfer issue for other crops or weeds.  The EPA scrutinizes any pesticide-related issues such as the Bt-based insect resistance traits or the herbicides that would be used on herbicide tolerant crops.  The FDA scrutinizes the data that the companies submit to demonstrate that their new varieties are functionally identical to non-modified versions of the crop. They don't have specific requirements because each crop and modification would be unique in terms of what matters. Still, that does not mean what is often alleged that there is "no required testing."  The submission is technically voluntary, but all biotech crop developers have always submitted data to the FDA.  Again, new crop varieties from all other mechanisms of genetic modification have no testing requirements at all, so if there is any testing it is on a purely voluntary basis. "GMO crops" are unique in that they must be tested and approved.

With all this analysis of GMO crops, it is should not be surprising that even though this technology has been adopted for billions of acres of crop production over 16 years, there have been no legitimate health or environmental problems, and rather a great many benefits.