A Curious Silence: The Environmental Working Group and Mycotoxins 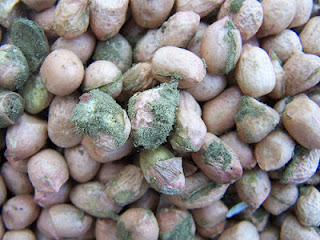 "The mission of the Environmental Working Group is to use the power of public information to protect public health and the environment."


If you look at their website, a great deal of what they do involves warning people about various "toxic risks."  They publish an annual "dirty dozen" list ranking crops by pesticide residues.  They have a major effort to identify purported risks from chemicals in cosmetics and sunscreens.  They look at toxic things in drinking water and in pet food.  They have an extensive "Chemical Index" with toxicity ratings.  But there are some very important toxins about which EWG is completely silent.

The extremely important class of toxic chemicals that is completely absent from the EWG website is Mycotoxins.  You can go to the search engine on the site and enter words like: mycotoxin, aflatoxin, fumonisin, ochratoxin, vomitoxin... and find absolutely nothing.  What makes this silence so strange is that mycotoxins are known to be some of the most dangerous substances to which people can be exposed, particularly in food.  If one of EWG's primary purposes is to "protect public health" it seems odd that they would not say one thing on their web site about this extremely well-documented risk.

Beth Hoffman, an information technology writer, raised an interesting issue today in an article in Forbes.  She was discussing the huge disparity between what government and academic scientists say about pesticide safety and what the Environmental Working Group says with its "Dirty Dozen" list.  She says, "But at its core, the argument for and against lists like the Dirty Dozen is a question of trust."

The EWG clearly distrusts the scientific/regulatory consensus.  But should consumers trust the EWG?

Should we trust an organization that either ignores or fails to recognize a real and present risk when they are telling us that there is significant risk where science says there is not?  EWG says it "provides practical information you can use to protect your family and community."  How can we trust that statement if EWG provides zero information about chemicals which are not in the "you just never know" category, but in the "clearly documented as toxic and carcinogenic" category?


Mycotoxins are potent, natural chemicals which are produced by certain fungi.  These fungi can, under various circumstances, grow on food and feed crops either while they are growing in the field, or later during the storage and/or drying of certain commodities.  The most important example is a toxin called aflatoxin which is produced by some strains of the fungi Aspergillus flavus and Aspergillus parasiticus.  These organisms can grow on things like peanuts, tree nuts, and corn.  It can also grow on hot chili's or figs while they are drying if that is done improperly.  It can occur in imported spices like nutmeg.  It has been found in imported chocolate.  It is thousands of times more toxic than most pesticides, and it is one of the most potent carcinogens known.  It is estimated that aflatoxin is the a major  cause of cancer deaths world wide.  Unfortunately, this mainly occurs in the third world, and even places like China are just now beginning  to address the issue.

Why Haven't Most People Heard of Aflatoxin or Other Mycotoxins


In the developed world, extraordinary efforts are made to keep food mycotoxin levels in general, and aflatoxin levels in particular, low enough to make our food safe.  The system works well enough that it does not come to the public attention very often.  This success is based on the same sort of science-based regulation and testing that are designed to insure that pesticide usage is safe.  The system of mycotoxin exclusion generally does a great job, but occasionally something slips through - mostly incidents involving pet foods or imported products from regions of the world that don't have adequate safety practices in place.

Just as an example, nut crops like peanuts and almonds can potentially become contaminated with aflatoxin, usually because of insect damage.  In our food system, the individual, shelled nuts that go into something like peanut butter or roasted almonds are put one-by-one through a light-based screening process to reject any individual nut with even the possibility of contamination.  Peanuts and other nuts sold in-the-shell cannot be screened to that degree.  EWG could instruct consumers to avoid in-the-shell nuts to protect their family. It has also been shown that eating green plants like spinach gives us chlorophyll which can bind aflatoxin in the gut so that it never gets into our blood stream.  EWG could recommend that one eats a salad with peanut butter sandwiches just to be safe.  EWG could talk about which imported foods might be most likely to have aflatoxin.  These examples would be practical guidance about real risks.  On such issues, the EWG has long been silent.   Contrast this with the proactive efforts by the Bill and Melinda Gates Foundation to address mycotoxin issues in the third world.  Yet this major oversight is not the only reason to distrust EWG.

A Serious Issues With the Way That EWG Does Its Analysis

An analogy might be helpful here.  Domesticated dogs come in a huge range of sizes from tiny Chihuahuas to huge Mastiffs.   They also come in a huge variety of personalities, from breeds which you could easily trust with a baby to those which have been bred for aggressiveness and which have been known to maim and kill people.  If anti-dog activists were to propose that any dog should be avoided and that people should move to towns that exclude all dogs, most people would dismiss the idea as ridiculous.  This is; however, directly analogous to what EWG does with pesticide residue data and their "solution" of buying organic.  The amounts of pesticides that the USDA finds on foods in its residue testing program can vary by 1000-fold or more - actually much more than the range of dog sizes.  The intrinsic properties of the different chemicals that are detected also differ even more than the differences between aggressiveness in breeds of dogs.  Yet what EWG does when it makes its dirty dozen list is to treat every residue detection the same.  This is just like our fictitious anti-dog activist who says that all dogs represent a equivalent risk, or that you just never know about any dog.  Why should anyone trust this method to analyze risk?

Beth, the Forbes writer, gives indications that she tends to distrust the scientific/regulatory consensus.  I wonder if she has thought about whether she should trust the EWG? Do you trust an organization uses a seriously over-simplified analysis of one category of chemicals while ignoring toxins of far greater concern?  Or might it make more sense to trust science backed up by government and academic scrutiny?

You can comment here and/or you are welcome to email me as savage.sd@gmail.com.