How I Helped Create A Superweed 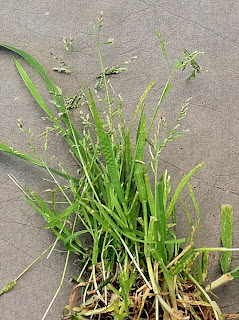 This last week I've been engaged in blogosphere discussions about "Roundup Resistant Weeds," and other so-called "Superweeds."  Many people want to assign blame for this development. The truth is that many factors were involved and the adaptability of weeds has been and always will be a big challenge.  I should know:  I actually once helped to select for a "superweed!"  I did so in the process of trying to find a "greener" alternative for weed control.

My Move Into Biocontrol

In 1989 I joined a small company called Mycogen, that was in the business of developing biocontrol agents - living organisms that control pests.  I had been working in synthetic fungicide discovery at DuPont and felt very good about the sort of safe, new products we were developing, but I wanted to give biocontrol a try (it also didn't hurt that I would be living in San Diego instead of Delaware).

I joned the "bioherbicide" group, and our most interesting project involved a bacterium in the genus Xanthomonas that had been discovered by a researcher in the Midwest  It infected a weed called Annual Bluegrass (Poa annua,  or ABG for short.  See the photo at the top of this post)  ABG is a big problem in turf because it makes lots of unsightly seed heads, creates lighter green patches, and has a tendency to die from disease in the summer leaving bare patches.  Golf course and park managers hate it.  However, because this grass is closely related to other desirable grasses, it has always been difficult to find ways to control it in turf.

OK, we knew that if we solved this problem we weren't saving the world, but this was a great place to start in biocontrol.   If we could make a product work for this high value market, that would fund the needed research to improve ways to grow and stabilize live products in general.  Also, even though bacteria usually only infect plants through wounds, that was not going to be a problem because this Xanthomonas biocontrol was applied during the process of mowing the turf.  Its effects were quite dramatic in greenhouse tests.  As one of my technicians once described this to a visitor: "this grass is not only merely dead, it's most sincerely dead."

Before we could field-test this "bioherbicide" option, we had to demonstrate to the USDA that this pathogen didn't just occur in the Midwest, and that it wouldn't kill any desirable plants.  I also got to go to Japan to help our partner company find isolates there as well.  That essentially meant touring lots of famous shrines and gardens while furtively reaching down and pulling up ABG plants and stuffing them in baggies to take back to the lab.  We had to learn to grow substantial volumes of the bacteria and how to keep them alive at least long enough to take to the field to test.  We had to test our bacteria in small plots of planted ABG to determine what rate was needed.  Once all that was done we were finally ready to try using this in the real world.

At first our experiments on actual golf courses, etc. were pretty exciting.  A week or so after the bacteria were applied, the ABG plants began to wilt.  It happened slowly enough that the desired grass had time to fill-in, and the area nicely transitioned from a splotchy, weedy mess to a nice, uniform turf.  We had lots of work left to do on stabilization before this new "bioherbicide" could be commercialized, but we had already started generating quite a bit of interest in the turf management community and elsewhere  (VP candidate Dan Quayle came to visit Mycogen during this period - we were just that cool - lol).

Soon, however, there was a problem.   We started finding that some of the ABG plants in our plots didn't wilt.  They looked just fine.  We collected seed and took it back to the lab.  It turned out that there was a "bio-type" of ABG which was not susceptible to this pathogen.  It was a "perennial biotype" of "annual" bluegrass (I know that sounds dumb for something named "annual", but instead of dying after going to seed like the annual type, this strain kept growing via rhizomes).  Our bioherbicide was simply selecting for those tolerant types.  We had selected for a "superweed" (in modern parlance).

This phenomenon turned out to be common for biocontrol agents.  Their beauty is that they can be super specific and thus safe to non-target plants and everything else.  Their downside is that populations of things like weeds almost always involve a wide mix of genotypes, and so our nice, "green," biocontrol agent selected for tolerance far faster than any synthetic herbicide.

Was This Really A Superweed?

Is it fair to call our Poa annua nemesis a "superweed?"  Actually that term is greatly over-used.  How "super" the weed is depends more on its original biology than on how it was selected (by a regular herbicide, by a herbicide used on a tolerant crop, by a biological agent...).  The most troublesome weeds are those that make a great deal of seed quickly, that emerge over a wide window, that have ways to spread seed, and which are highly competitive with the crop.  ABG has all those characteristics and that is part of why you can find it just about anywhere.  The resistant lines that we had "created" by spraying out bacterium were no worse than the original.  They were just resistant to our bioherbicide. The same is true with weeds that have become resistant to Roundup or to a host of other herbicides.  The reason some of the current resistant weeds are important is that they grow in important food crops.  The US has something like 50 million acres of managed turf, but that isn't feeding anyone except some rabbits.  So, the "superness"  of weeds isn't  a function of whether they are related to GMO crops, it comes down to their fundamental biology.  Also, to be accurate no one "creates" a super weed.  We just select for something that natural biological processes have generated. So that's how I helped select for a superweed.  This technology was not commercialized because the weeds had already beat us.  It is poetic irony that annual bluegrass is a huge issue in my own lawn and garden. (See the lighter colored areas in my mixed clover and tall fescue lawn.)

Oh, by the way, I still keep up with the status of the biocontrol industry since I left it in 1996.  They are definitely making some good progress, but its still a very small part of how we control pests.  That's OK, we need all the tools we can find.

You are welcome to comment here and/or email me at savage.sd@gmail.com
Posted by Steve Savage at 11:39 AM